The Pigs of God: Force-fed then slaughtered for spectacle

Nov 7, 2019Ceremony and Religious Use 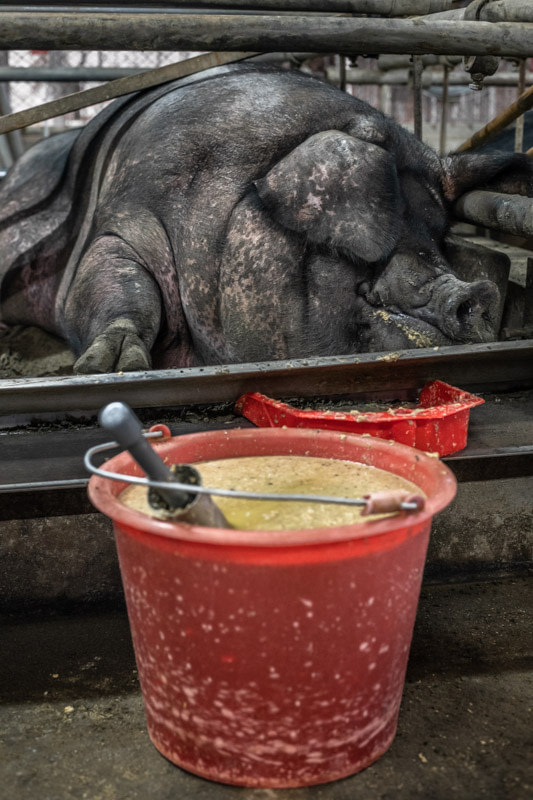 To view more images and video related to this story, please visit our Traditional Animal Use gallery on the We Animals Archive.

​Earlier this year, we visited a Pigs of God fattening farm to document the lives of the animals inside.

The pig farm lay at the end of an unassuming road. The owners emerged from a garage to warmly welcome us to their fattening facility. Inside this nondescript garage were rows of sandy pits, surrounded by thick bars that encaged the largest pigs I have ever seen. Fat pigs, of course, was the point. 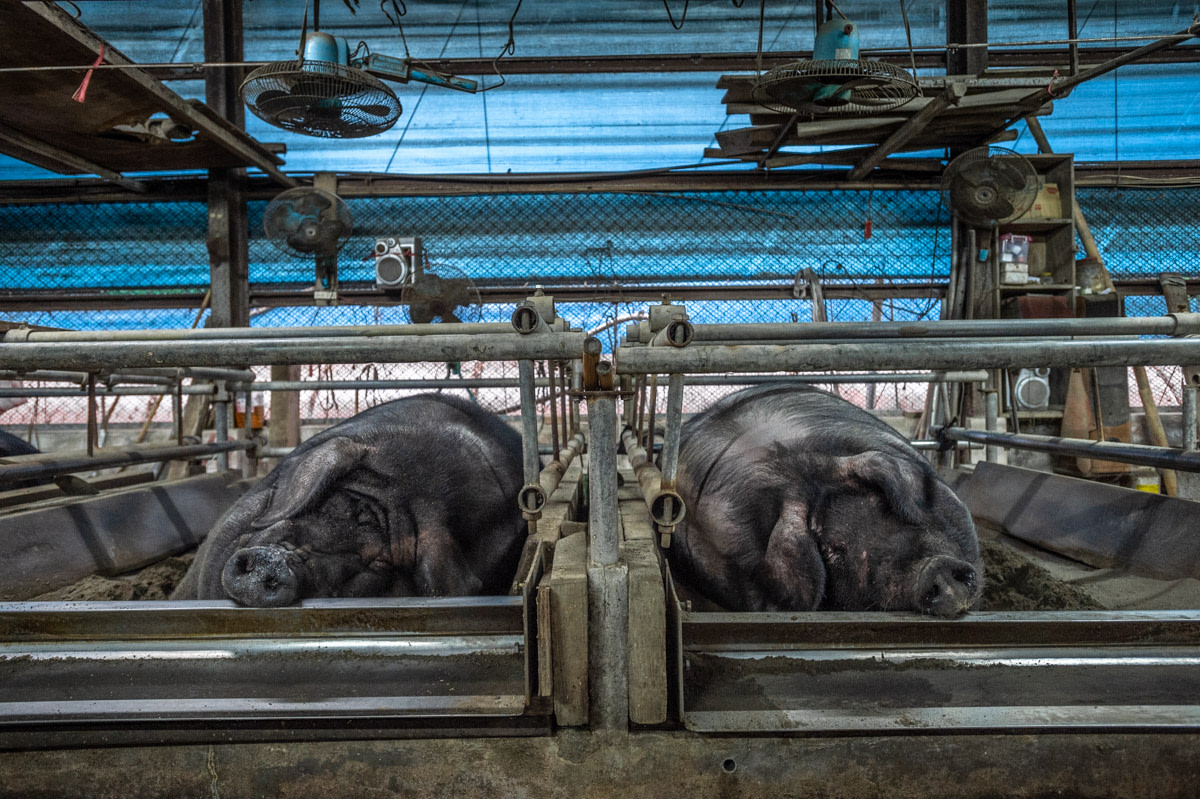 “The origins of the pig weighing contest trace back to Japanese rule when the colonial power established the contest to promote increased pork production, combining it with local sacrificial rituals. The practice has since evolved into a form of gambling, as those purchasing pigs from specialist farmers predict which pig is likely to be awarded the prize in two or three years’ time.” – EAST
The pigs lay awake and aware but unprotesting. They had long since given up trying to move around or away. Some of the pigs were able to right themselves to roll over onto their other side, but that was the extent of their mobility. Bars and planks kept them immobile.

For 16 consecutive years, the Taiwanese NGO Environment and Animal Society of Taiwan (EAST) has been campaigning for an end to the Pigs of God weighing contest.

Pigs reared for the contest are confined in these small enclosures for the duration of their life and force-fed a wet mix of carbohydrate-heavy grains using a metal tube or shovel until they reach debilitating weights, often in excess of 700 kilograms — around seven times heavier than that of pigs reared for meat. Each pig can be made to consume over 100 kilograms of food per day. The grotesque weight causes the animals to suffer chronic health problems.
One pig, in particular, ate reluctantly. I use the word “ate”, but that’s not exactly what was happening. While some pigs chewed and swallowed what was pumped into their gullets, this pig protested by keeping her mouth closed, and so the process in her case truly was one of force-feeding. There was only so much she could do to object; there was nowhere for her to turn or move, as the feeding device is designed to slide easily into a mouth. The feed was pumped in, but would then slowly ooze out through her lips. The feeder caught the falling mush in a dustpan, which she then returned to the large red pail of food.

Hers was an act of resistance. She seemed at once resigned and strong-willed. She kept eye contact with me more than any of the other pigs that day. Whether because I was new there, or because I was pointing an unusual contraption at her that went “click”, she was vigilant in her observing.

We were invited to visit the barns with the younger pigs. Of the hundreds, ranging from young piglets to young adults, only a select few would have the “honour” of confinement and force-feeding.

Even at midday, the barns were dark, and we used our own lighting to illuminate the nervous figures, caged both in groups and alone. In the darkest corners of the barn were female pigs kept in stalls in which they could not turn around. But they could look up and around, and it seemed clear that they wanted to be free.
The Pigs of God contest continues to be celebrated at a small number of Taiwan’s thousands of temples belonging to Taoist, Buddhist, and folk religious traditions. After the contest weigh-in, pigs are slaughtered by knife without any form of stunning – despite slaughter regulations – in front of a crowd of spectators.
In a brief by EAST in August 2019, the organization reports:
“While sacrificial offerings have roots in Taiwanese folk customs, the contest to raise the heaviest pig promotes the gratuitous abuse of animals for prizes and face. The majority of temples and devotees have come to disapprove of this cruel practice and switched to more humane rearing and slaughter methods—or even creative modern alternatives made of rice, noodles, flowers, and fruits. But to this day, an extreme minority of temples insist on perpetuating this cruelty. These temples hold award ceremonies with local political leaders to honour the owners of the heaviest pigs, incentivizing this shocking abuse. Taiwan’s animal protection legislation clearly prohibits such cruelty to animals, however, authorities have repeatedly used ‘religious freedom’ as an excuse not to enforce the law, putting Taiwan’s treatment of animals in the international spotlight year after year.”

EAST’s current campaign to bring an end to the Pigs of God contest is quickly gaining traction and has reignited debate across Taiwan.

Text and images by Jo-Anne McArthur.

To view more images and video related to this story, please visit our Traditional Animal Use gallery on the We Animals Archive.

We Animals Media Takes You Inside Dakshinkali Temple in Nepal

Prolonging Death: The Practice of Fish Tethering in Asia

An Expose on Animal Clubbing at Thai Slaughterhouses

← Censored Landscapes The Current State of Cetacean Captivity →
Share This