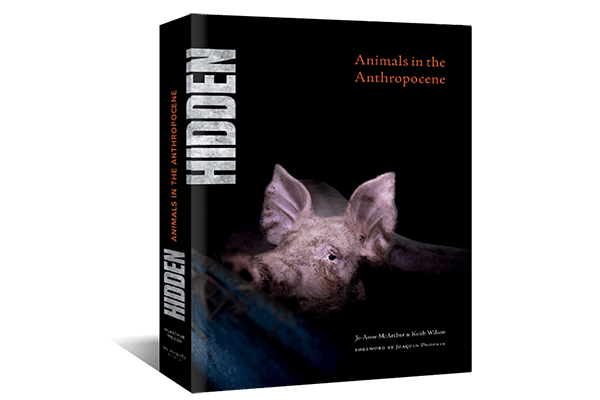 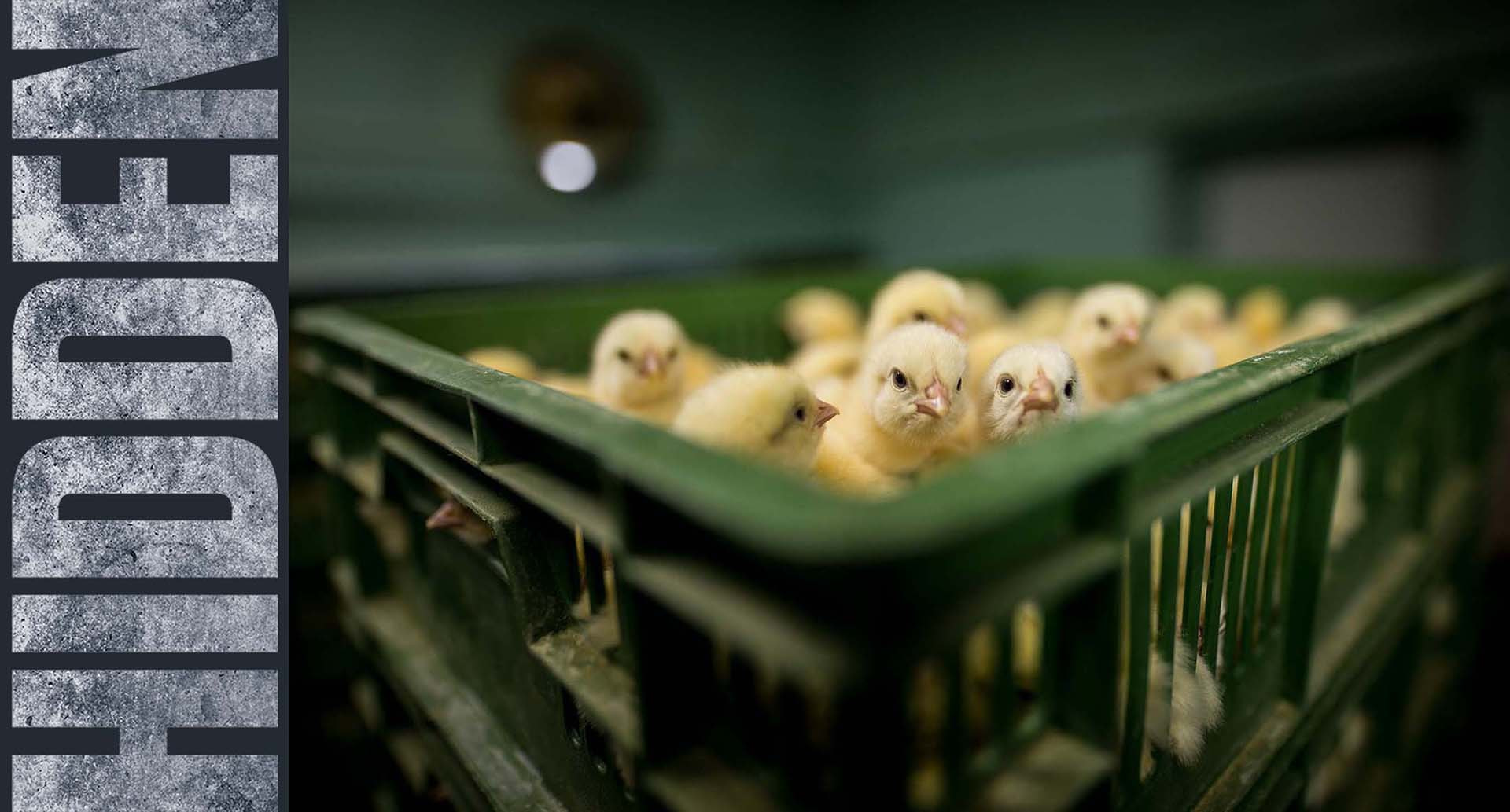 Our Team
Photographers
Featured Press
For Media
HEADER IMAGES: Paul Hilton (Man with Shark) | Jose Valla (Man with Dogs) | Konrad Lozinski (Chicks in Crate) | Aitor Garmendia (Cow and Knife)
HIDDEN: Animals in the Anthropocene is an unflinching book of photography documenting our relationship with non-human animals in the 21st century, as depicted through the lenses of 40 award-winning photojournalists.

The Anthropocene is the proposed name for the current geological epoch. In this era, human activity is the dominant influence on climate, the environment, and all life on earth. As we enter a new decade, an estimated 80 billion land animals continue to be used and consumed by humans each year. The majority of these animals are raised and killed within industrial agricultural systems. Fish and other marine life are measured by tonnes.

HIDDEN adopts an unashamedly pro-animal perspective, yet also understands the important role community leaders, educators, policy makers and activists play in determining a future relationship with animals based upon a compassionate and humane co-existence.

“The photojournalists featured in HIDDEN have entered some of the darkest, most unsettling places in the world. The images they have captured are a searing reminder of our unpardonable behavior towards animals and will serve as beacons of change for years to come.”
JOAQUIN PHOENIX, ACTOR AND VEGAN ANIMAL RIGHTS ADVOCATE
*Joaquin contributed the foreword to HIDDEN.
Aitor Garmendia

EXHIBITIONS | Back to Top

OUR TEAM | Back to Top

Jo-Anne is an award-winning photojournalist, author and the founder of We Animals Media. She has photographed in over 60 countries and speaks internationally on the subjects of the human-animal relationship, social change, and empathy.

An acclaimed photo editor and journalist, Keith is a Fellow of the Royal Geographical Society and the founder and past editor of Outdoor Photography and Wild Planet magazines. He has interviewed the best-known photographers of our time. This will be his ninth co-produced book.

David was the visuals editor of The Washington Post, director of photography of National Geographic, and has held many other design and photography positions in the media.

Britta is the co-editor of Photographers Against Wildlife Crime and joins our team in colour editing HIDDEN.

Sayara is a Montreal-based activist, writer and editor. She joins the HIDDEN team as copy editor.

Jo-Anne is an award-winning photojournalist, author and the founder of We Animals Media. She has photographed in over 60 countries and speaks internationally on the subjects of the human-animal relationship, social change, and empathy.

An acclaimed photo editor and journalist, Keith is a Fellow of the Royal Geographical Society and the founder and past editor of Outdoor Photography and Wild Planet magazines. He has interviewed the best-known photographers of our time. This will be his ninth co-produced book.

David was the visuals editor of The Washington Post, director of photography of National Geographic, and has held many other design and photography positions in the media.

Britta is the co-editor of Photographers Against Wildlife Crime and joins our team in colour editing HIDDEN.

Sayara is a Montreal-based activist, writer and editor. She joins the HIDDEN team as copy editor.
Andrew Skowron

“I am, quite simply, in awe of these photographers. In a way, they are like war photographers, except witness to a war that so many people have little idea exists, or choose to suppress that exists. This takes enormous inner strength and bloody-minded determination to illuminate the mass extermination that unfolds every second of every day across the planet.“

The strength of this book is in its contributing photographers. HIDDEN represents the work of 40 photojournalists who have – and continue to – document animal stories. These photographers are the heroes who work globally to investigate and expose animal use. Their exhaustive and in-depth work has resulted in some of the most compelling and historic images of animals that we have seen.

Our photographers have also been published in and interviewed by publications such as National Geographic, GEO, BBC Discover Wildlife, The Guardian, CNN, Telegraph, New Scientist, Newsweek, The Sunday Times, Nikon Pro, Black+White Photography, Vice, La Repubblica and The Washington Post. Additionally, their work has been used in animal advocacy campaigns worldwide.

The work of an animal photojournalist is often challenging and deeply personal. Learn more about the individual motivations behind the work of selected contributing photographers below.

“We make countless split second decisions when taking shots that reflect our emotions. The resulting images are a window into the soul of both our subjects and ourselves.”

“I want the aesthetics of a photo and its beauty to catch the viewer’s gaze and thus serve to understand horror and injustice.”

“Whilst it can feel isolating doing this kind of work, HIDDEN serves as a reminder of how each investigator inspires others to continue, and that we’re in this together for animals.”

“We’re at such a stage of evolution that we don’t have to kill animals. The fact that we still eat meat is just a matter of convenience.”

“To move towards a society where the interests of animals are respected and not discriminated against, it is necessary to know the serious situation they are suffering. And our duty is to expose it.”

“I use my photographic language, my personal way to tell stories, because I want to make these terrible images more understandable—to let people be more empathic.”

“When I take photos, I try to think of images as open wounds that can’t be ignored. They should communicate pain.”

“I believe that raising the status of animals so that animal issues are on the political agenda is maybe the most important task of the animal rights movement.”

“I’m certain that future generations will look back at our current attitudes towards and treatment of animals with great shame.”

“We must respect all species and protect them ferociously because ultimately, all life depends on it. Without the complex web of life, we all die. It’s that simple.”

“I always keep an eye on the animals; their comfort comes first. I don’t want them to get stressed, so I do it fast. There is no room for emotions.”

“We must always remember that those animals portrayed in the photos will be dead when the public sees them. I feel a big responsibility when I think about that.”

“Freedom has always depended on our ability to identify systems of injustice. I see it as our duty as artists and photographers to make the issues of our time visible.”

Luis Tato
“HIDDEN is an essential document for the Anthropocene. Humans are not only killing trillions of animals per year but also contributing to pandemics, climate change, and other global disasters as a result. We need to end this violence, and that starts with bearing witness, so that we can pay out respects and resolve to do better. In showing us such moving images of nonhuman lives and deaths in a human world, this book is brilliant as art, education, and advocacy all at once.“
JEFF SEBO, PHILOSOPHER
PROJECT IMPACT | Back to Top

From the beginning, our goal was to share the message of this critical book with as many people as possible. Making visible the animals in this book is one crucial piece of the puzzle when it comes to animal justice. HIDDEN additionally serves as a document that gives credibility to the coverage of its subject matter. HIDDEN acts as testimonial and proof and serves as a vehicle for a global conversation about our use of other animals.

Thanks to the support of our crowdfunding supporters and Publishing Partners, We Animals Media will be sending hundreds of books to people and organizations of influence around the world: politicians, chefs, journalists, podcasters, teachers, NGOs, and global leaders. Our goal is that this collection of difficult photographs will inspire compassion, conversation, and most importantly, change.

At its core, HIDDEN is a global conversation and a call to action.

View and download the book’s companion PDF, entitled “The Way Forward,” about what’s being done worldwide to help animals, and how we can all take part.

Natural History Museum| Animals in the Anthropocene | Our Broken Planet

Creative Live | We Are Photographers Episode 77

The Walrus | Why We Need to See Images of Animal Cruelty

The Guardian | ‘Some of the Darkest Places in the World’: Joaquin Phoenix on a Photobook about Slaughterhouses

“HIDDEN is a strident cry in the darkness of the human soul, which makes one wish from the heart that benevolence and compassion may prevail! Please have a heart and use it with courage and determination, spreading the powerful message of HIDDEN and acting upon it.“
Matthieu Ricard – Buddhist monk, photographer, author & humanitarian
FOR MEDIA | Back to Top
Please see our full media kit for HIDDEN here. For specific inquiries regarding interviews and other media opportunities, please email media@weanimals.org

HIDDEN is published by We Animals Media and Lantern Publishing and Media is the global distributor.