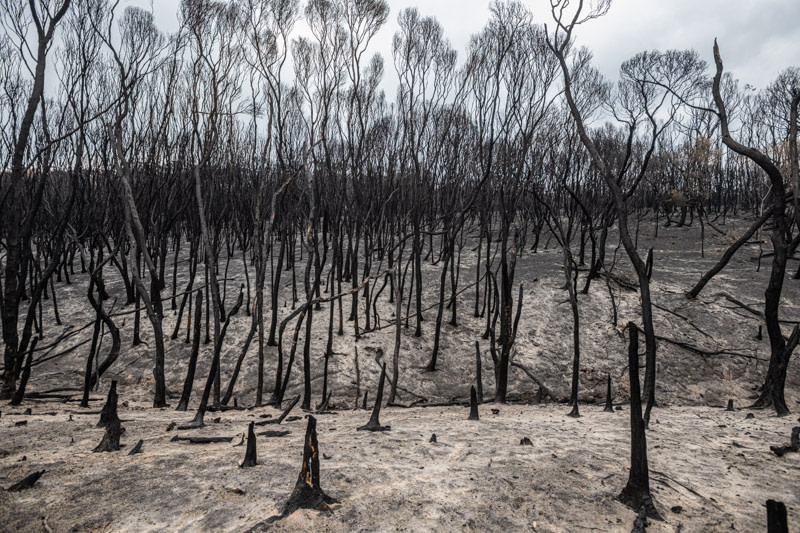 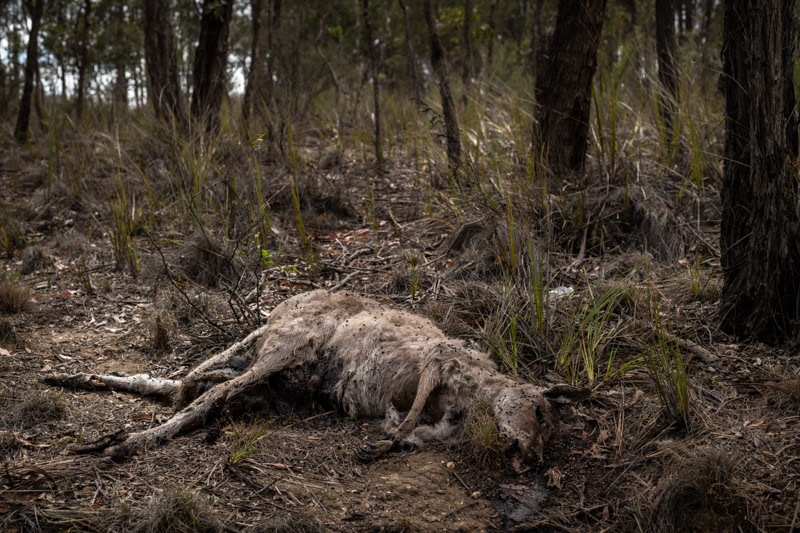 Top: Scorched landscape near Mallacoota
Bottom: A dead kangaroo in the Buchan area

This summer, Australia’s unprecedented bushfires have given rise to seemingly unprecedented goodwill. Money is pouring into organisations rescuing and treating native animals injured and displaced by the fires.

An eastern grey kangaroo and her joey near Mallacoota.

Australians are volunteering to deliver food drops to clinics or burned forests, and as far away as France local groups are self-organizing to knit pouches for orphaned kangaroos.

An estimated one billion wild animals have died in these bushfires. There is desperate concern for the country’s koala population, which is estimated to have been reduced by 30%. In one instance, hundreds of bird carcasses washed up on a beach, having been choked by smoke as they tried to escape to sea.

A lone wallaby foraging for food in a burned forest outside Mallacoota.

In blackened bushland, a lone wallaby hops through the desolation – an unlikely sign of life amongst the debris. The few still wandering congregate on golf courses and gardens: any patch of land that might still offer some grazing. The wallaby pauses to eat some fungi – not a preferred food source, but he is at risk of starvation. Koalas sit silently in trees, surrounded by charred eucalyptus leaves, which they won’t eat but there is nowhere else to go. These are the survivors, and they are still desperate.

Kangaroos and wallabies who survived the fires congregate on people’s lawns to graze on living grasses.

One might expect the financial and human resources funneled toward the wildlife rehabilitation effort to manifest in an efficient and coordinated on-the-ground response. But driving on roads scattered with roadblocks towards Mallacoota, the small town that became the epicenter of one of the season’s biggest fires, all is quiet. There is no birdsong, no sound of distant vehicles.

Where are all the helpers?

Despite vast numbers of professionals and volunteers standing by, access is an obstacle. Many roads remain closed, and government process restricts rescuers from entering burnt areas. One veterinarian with a major international animal organization travelled to Australia to help rehabilitate wildlife on Kangaroo Island, where fires have destroyed 50% of bushland, only to be denied access.

In some places, guerilla vets and wildlife rescuers are conducting unauthorized rescues, finding and transferring animals to government workers and emergency services for evacuation. But these few people can only reach so many.

A skinny and dehydrated koala who has been darted with a sedative is captured and lowered from the tree for veterinary care.

In one area, young joeys with burned legs, tails and paws are triaged on site. Though their injuries aren’t necessarily fatal, there is no way to treat or to transport them to clinics or sanctuaries through the roadblocks. In some cases, the tough decision to humanely euthanize animals is made.

Top: Wildlife carer and Animals Australia staff member Louise Bonomi rests her hand on a euthanized wallaby, one of the many burn victims in the Mallacoota area.
Left: A burned koala who also lost her mother in the fires is given food and medication at the RSPCA mobile triage unit in Bairnsdale.
Right: A possum’s burns are treated in the Southern Cross Wildlife Care surgical unit.

There is no shortage of experts or funding, so where are we falling short? The picture is bleak. Donations are distributed to rescue groups, who are for the most part unable to access affected areas. Vets on the ground are lacking proper clinics and supplies to do their work. And with some sanctuaries and local carers at capacity, rescued animals have nowhere to go.

A lone wallaby foraging for food in a burned forest outside Mallacoota.

Even after the lessons learned from the Black Saturday bushfires a decade ago, systems simply aren’t in place to do this work. The country is not organized to respond to disasters like this, at least not for animals. Appropriate transport and care on site requires planning, preparedness and inter-agency collaboration. So for as long as generosity and expertise are undermined by structural unpreparedness and politics, we will continue to fail these animals.

‘It’s a sorry sight’: Dead birds wash up on Mallacoota’s beaches The Age