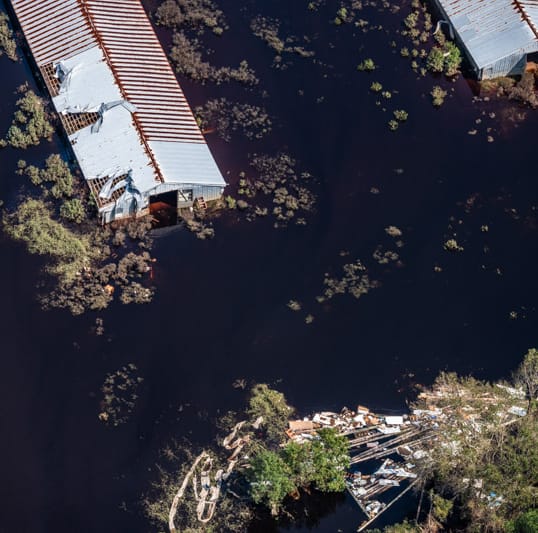 To view more images and video related to this story, please visit our Hurricane Florence and Transport galleries on the We Animals Archive. Drowned body of a broiler chicken through a chain link fence, in Hurricane Florence flood water. North Carolina, USA, 2018.
The climate crisis could be the greatest animal justice opportunity of the 21st century.
The above sentence mimics a 2015 claim made about global health in the highly respected medical journal The Lancet. The journal’s editors reasoned that the social transformations required to tackle the climate crisis create an opportunity to confront global health problems that precede—and exceed—the crisis. The same is true of our violent relationship with animals.
Humanity’s brutal mistreatment of animals was not caused by the climate crisis. But in confronting the climate crisis we have an unprecedented chance to transform that relationship for the better. Activists for animal justice should lead efforts to ensure that nonhumans are included in a “just transition” to a post-carbon society.

Animals transported for slaughter from across Europe through the Bulgarian-Turkish border. Turkey, 2018.

Cattle feedlot. Israel, 2018.
The industrialization of food production, including fish, meat, dairy and eggs, preceded the Great Depression. However, the development of new high-speed, large-scale productive technologies during WWII extended to the production of food. This meant even larger numbers of animals were drawn into the industrial system. As the numbers increased, animals were treated less and less as living beings and more and more as material inputs.
The increased scale and pace of production was enabled by fossil fuels. Energy-dense fossil fuels powered the new machines. But it also facilitated transportation that encouraged concentration to take advantage of economies of scale. The result was the euphemistically-named concentrated animal feeding operations (CAFOs), better known as “factory farms.” Distantly grown feed could be hauled long distances to animals housed in enormous temperature-controlled barns, where the animals were subject to the rationalization and standardization of industrial production. Animals or animal products could then be transported to distant markets.
CAFOs increased in scale and drove down the relative price of animal products. As the supply of animals-as-inputs increased, processing technologies also scaled-up, demanding more and more energy. The primary energy source was coal and crude oil. Fossil fuels are implicated in our increasingly inhumane use of animals. They are further implicated in an untold number of harmful side effects of large-scale animal raising operations. Those harms are both contributing to, and worsened by, climate change.

Industrial farm surrounded by Hurricane Florence flood water. North Carolina, USA, 2018.
In North Carolina, the volume of waste produced by pig CAFOs are despoiling the air and water. These harms were brought into stark relief by Hurricane Florence, which caused the failure of the cesspools where pig waste is collected. Climate change is making hurricanes more intense and more frequent, increasing the threat to both the animals in their path and the humans that live alongside the noxious factory farms.

Dead fish floating in floodwaters after Hurricane Florence in North Carolina. USA, 2018.
Increased scale and concentration of animal production is also implicated in destruction of the Amazon rainforest. Brazil exports 20% of the world’s beef. Both pasture creation and cattle feed production are driving deforestation. Among the many consequences of rainforest destruction is the loss of an important carbon sink. Rainforests capture large amounts of carbon, which is released when the forests are destroyed.
There are other forms of oppression in these examples. The North Carolina factory farms are disproportionately located in counties with high proportions of people of colour. The deforestation of the Amazon encroaches on the territories of Indigenous peoples. The many injustices of capitalism are so intertwined that change in one part of the system will have untold effects in other parts. That is why a Green New Deal must be sensitive to the many, complex relations that are enmeshed with fossil fuels and carbon emissions.
It is the enormity of the necessary change that presents us with the opportunity to change our industrialized relationship with animals.

Broiler chickens being collected for slaughter. Spain, 2009.
The Green New Deal needs to move people from high-emissions jobs into low-emissions jobs. It must end our unsustainable practices of production and consumption.
(Green) New Deal
The Green New Deal draws its name from the New Deal of the 1930s. The New Deal was a set of policies intended to raise the U.S. economy out of the Great Depression. It included banking reforms, new and expanded welfare programs, and ambitious public works spending.
The name “Green New Deal” was coined over a decade ago in a report out of the UK outlining policies to address both the financial crisis and the climate crisis. The phrase has gained visibility over the last year thanks to its most high-profile champion, U.S. Congresswoman Alexandria Ocasio-Cortez. Another high-profile proponent is Naomi Klein, whose latest book bears the sub-title The Burning Case for a Green New Deal. Recently, young activists staged a sit-in of Canada’s House of Commons to demand a Green New Deal.
The vision of the Green New Deal, like the original New Deal, is economic transformation to both protect people from current harms and to lessen or eliminate the causes of those harms. In the case of the Great Depression, the (over-simplified) cause was under-investment that created a feedback between lack of jobs and lack of consumer demand. In the case of the climate crisis, the cause is excessive investment in high-emissions systems of production.

Broiler chicken farm. Taiwan, 2019.
The original New Deal needed to create jobs for all those without one. The Green New Deal needs to move people from high-emissions jobs into low-emissions jobs. It must end our unsustainable practices of production and consumption. This will require some radical changes to our economic systems. This makes the task of the Green New Deal much more daunting than its namesake. But it is the enormity of the necessary change that presents us with the opportunity to change our industrialized relationship with animals.

Chicken slaughterhouse. Canada, 2017.
Learning from the New Deal
The New Deal had some significant flaws. Notably, it failed to achieve its objective. Although the New Deal lessened the burden of the Great Depression, the policies did not return the U.S. economy to pre-depression levels of income and employment. Economic recovery required the ambitious economic transformation required to fight WWII. This suggests our vision for social change should begin with the incredible economic transformation required and achieved to defeat fascism in Europe.
Another major flaw of the New Deal was that it explicitly favoured White Americans. Before the Great Depression, Black Americans had lower incomes and higher unemployment than White Americans. Black Americans were then hit harder by the economic downturn. The U.S. government could have used the opportunity of the New Deal to address the economic divide between White and Black Americans. Instead, the policies maintained and entrenched the divide.
The failure of the New Deal to acknowledge and address racial injustice is one reason advocates of a Green New Deal are talking about a “just transition.” We cannot allow policies intended to create a net-zero emission economy to bolster systems of oppression.
If improving the treatment of animals is identified as an important and desired outcome, then climate action could have positive effects for the lives of animals.

Animals transported by sea from Australia to the middle east. Israel, 2018.
A carbon price is an important measure. But it is insufficient for addressing the climate crisis, especially if we want a just transition. Government policies, informed by activist demands, are necessary. We must prioritize informed government action, which can uniquely shift systems of production to net-zero emissions at the speed and scale required. In that shift, there is incredible opportunity. On the one hand, policies prioritizing local food security would also change the economics of factory farming. On the other hand, government-supported innovation in protein production could replace the high-emission and cruel protein derived from animals.

Activists protest live transport. Israel, 2018.
There will always be unintended consequences.
Justice must be our guide.
Popular movements are also necessary. Activists can target companies and governments that refuse to implement just carbon policies. However, movements must understand how the climate crisis intersects with other social ills. As noted above, the harms of the North Carolina factory farms intersect with racial oppression. The harms of deforestation in the Amazon intersect with Indigenous rights. There will always be unintended consequences. Justice must be our guide.
In the face of worsening hurricanes, large-scale pig operations of North Carolina should be reduced to lessen the threat from pig waste. This would increase the price of pork, reducing demand. A boycott of Brazilian beef would have a similar effect. In both cases, we must be aware of negative consequences, especially the loss of jobs. Quickly addressing these losses requires government action. Some advocates of a Green New Deal include calls for a job guarantee. This would be a safety net for those whose jobs depend on high emission production. However, it would also reduce the need to accept undesirable, dangerous and low-paying work associated with animal production.
A post-carbon future is coming, one way or another. It can either be a brutal descent into barbarism, in which the vested interests shore up their advantages, or it can be a just transition that includes dramatic, positive changes in our relationship with each other, animals and the Earth.

To view more images and video related to this story, please visit our Hurricane Florence and Transport galleries on the We Animals Archive.

← 2019 Our Year In Review Live export: The Longest Journey →
Share This