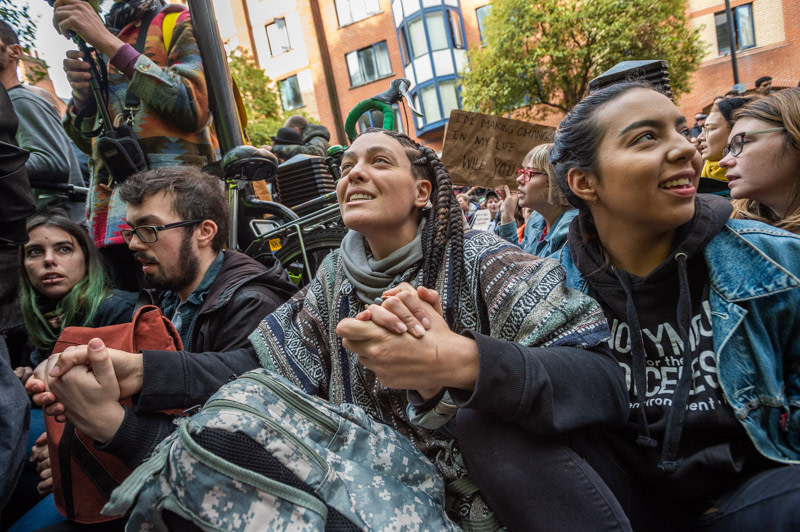 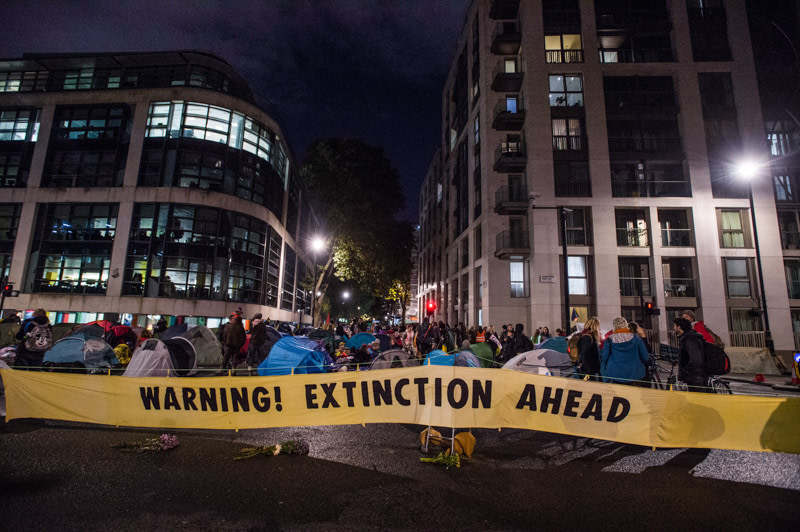 Top: Hundreds of AR protesters at a sit-in at DEFRA (Department of Environment, Fisheries, and Rural Affairs). Bottom: One of many XR camp sites across the downtown London core.
Text and images by Jo-Anne McArthur.
Download Images/Video

To view more images from this story, please visit our Animal Rebellion Extinction Rebellion gallery on the We Animals Archive.

George Monbiot delivers an impassioned speech to protesters at the Smithfield meat market takeover. England, 2019.
Non-human animals are almost always left out of the equation, be it political, economic, legal, environmental, or scientific. Animal advocates decided they would not be relegated to fringe considerations too.
I recently (October 2019) photographed Extinction Rebellion’s (XR) mass demonstrations against the British government’s inertia with regards to the pressing problems of climate change. As someone invested in documenting the animal advocacy movement, I was particularly interested in the actions of Extinction Rebellion’s sister organization and ally, Animal Rebellion (AR).
AR is an anti-speciesist organization that doesn’t want animals left out of the climate change conversation. We know that industrial farming directly impacts climate change, and we know that billions of sentient beings suffer because of farming. Animal Rebellion argues that to end the climate crisis and achieve justice for animals, we must transition to a plant-based food system. Additionally from AR’s website: Animal agriculture accounts for around 14.5% of all human induced emissions. It uses 83% of global farmland, while only contributing 18% of calories. Almost half of all plastic in the Great Pacific Garbage Patch consists of nets from the fishing industry.

Animal Rebellion argues that to end the climate crisis and achieve justice for animals, we must transition to a plant-based food system.

Animal Rebellion protesters at a sit-in outside DEFRA (Department of Environment, Fisheries, and Rural Affairs).

“The truth is our current governments, businesses and institutions have pretty much failed us on both climate change and animal use. And in doing so, we have massively failed the animals we share the planet with, and the people at the brunt of climate change already, and our generations to come. Urgent action is required, and if governments, businesses, institutions and departments insist on dragging their heels, and effectively dismissing the science especially in relation to ‘livestock’ farming, then we have to expect an escalation of disruption, unrest, protest and the associated negative impacts this brings. If we don’t want to see disruption, we need to see immediate effective action.”

Animal Rebellion protesters at a sit-in outside DEFRA. England, 2019.
Tens of thousands of people took part in XR and AR protests in London, which has now sparked a continuing global movement. I went in with a tremendous amount of curiosity about the people taking part. What I witnessed was an extremely organized and democratic program for disruption, made up of people trained in how to conduct themselves in peaceful protest.
The camaraderie was visible on every tent- and protest-packed block, and the community ethos was emblematic of the full two weeks. Though XR and AR were born of a profound urgency to be heard on extremely serious matters, a sense of levity buoyed people through the rain, arrests and tear-downs.  One protester on lock down – a common term for a protester who has locked, tied, or glued themselves to a place or other person at an agreed-upon location for a pre-meditated action – joked “When are they going to come and arrest me, already? I have an appointment at 3!”

Top L: AR activists holding space at DEFRA. Top R: Enjoying a laugh with fellow protesters on lockdown. Bottom: An AR protester is arrested and carried to a police vehicle.
Particular to Animal Rebellion, however, was a solemnity around the actions at places of animal exploitation, like at Smithfield, London’s oldest meat market, and at Billingsgate fish market.

Top: AR protesters in the early morning hours at Billingsgate fish market.
No one would bat an eye to a candlelight vigil for humans or call it an overly sentimental gesture.

The candlelight vigil at Smithfield meat market.
In the early morning hours at Smithfield market when the trucks carrying the bodies of animals started arriving, a candlelight vigil took place in acknowledgement of the animals we consume. When the activists set out to circumnavigate Smithfield with candles in hand and solemn songs, I felt removed instead of immersed. Who was this procession for, and if it was for the consumption and opinion of media and its merciless audiences, would they not be opening themselves up to enormous critique, as “overly emotional” activists? In this act, these people made themselves truly vulnerable, and I felt sympathetic to that.
As the procession continued around the market, however, I let the earnest lyrics of their songs permeate, and I felt drawn into this mourning community. A crowded candlelight vigil at a meat market is a thing to behold, photographically, but I found myself moving from outsider to insider; from worried sympathy to entangled empathy. No one would bat an eye to a candlelight vigil for humans or call it an overly sentimental gesture. And it is a really strong gesture. A vulnerable, open-hearted honouring of the suffering and deaths of other species. I came around to deeply appreciating the symbolic and uniting value of the action.
By putting our bodies on the line and risking our liberty, we make this great neglected issue impossible to ignore. – George Monbiot

George Monbiot awaiting arrest at Trafalgar Square.
Action is the nemesis of inertia, with myriad beautiful branches: momentum, solidarity, catharsis, change.
The efforts that XR and AR activists collectively and personally expressed, in order to take part and be heard, were awesome. Participants really put themselves on the line, physically and emotionally; financially too. Activists are (and have always been) subject to harassment, bullying, arrest, incarceration and the ongoing resulting time lost, fines, alienation, not to mention exposure to the relentlessly terrible  English weather! As with all protests, numbers count. With the tens of thousands of participants in London and more broadly worldwide, their efforts have achieved their goals for visibility and discussion, and we are already seeing its ripple effects with moderates and in the mainstream. Among countless examples is that, following the Smithfield meat market Animal Rebellion takeover, plant-based meats will be sold at this historic landmark for the first time in its 700 years.

Animal Rebellion set up a plant-based market at Smithfield.
Long live the “uncooperative crusties”! (Descriptively coined by British Prime Minister Boris Johnson and gleefully integrated into the protest culture at every opportunity.)
These images offer a glimpse into life and spectacle on the streets during Extinction Rebellion and Animal Rebellion. I’m fascinated and impressed by the people who care enough to show up, organize, take time off work, speak out, and put themselves at the mercy of arrest and derision. Action is the nemesis of inertia, with myriad beautiful branches: momentum, solidarity, catharsis, change.

Animal Rebellion at their protest camp outside DEFRA (Department of Environment, Fisheries, and Rural Affairs).

Images and text by Jo-Anne McArthur.

To view more images from this story, please visit our Animal Rebellion Extinction Rebellion gallery on the We Animals Archive.

George Monbiot, The Guardian. “Today, I Aim to Get Arrested”.