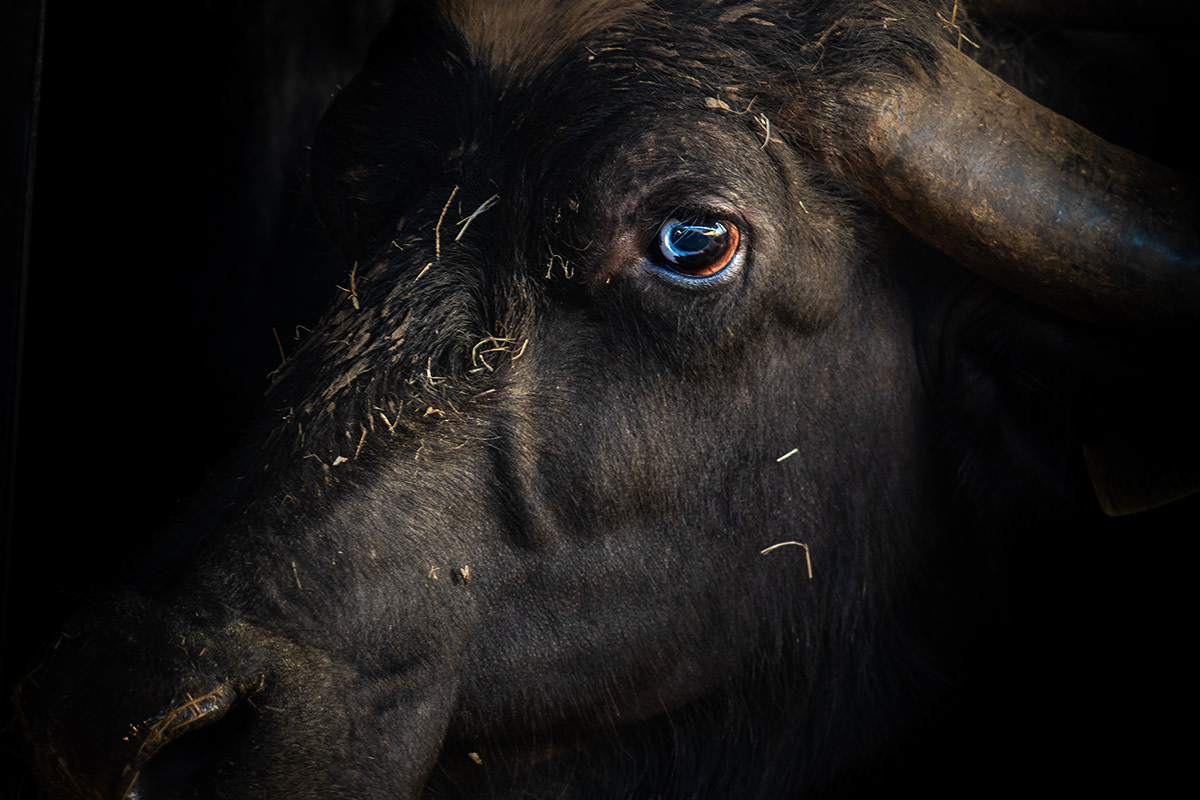 Interview by We Animals Media. 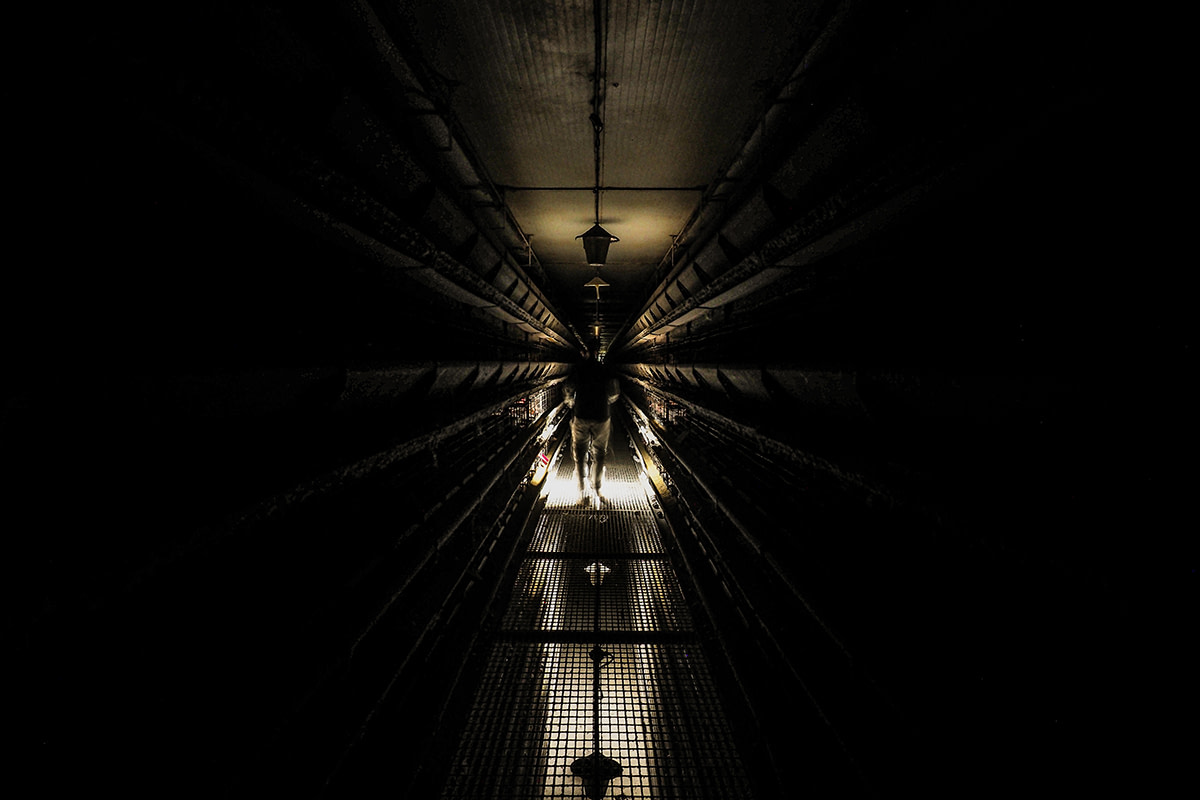 Selene Magnolia is an Italian freelance photojournalist and investigator. With a background in grassroots activism, her work spans issues relating to social justice, anthropology, human rights, feminism, animals, the environment and food production. Selene was raised in the Italian Dolomites and now lives between London, where she studied at the British Academy of Photography, and Berlin. Her belief in research, slow journalism and an ethos of political participation informs her approach to documentary projects, and she is also involved with direct action groups defending solidarity. Photography and investigative work are, for her, a political tool to spread awareness and to promote change. Selene is one of the contributing photographers to HIDDEN: Animals in the Anthropocene. We interviewed Selene for the We Animals Media Photographer Series.

Why do you do what you do?

I remember the smell, the blood on my face, the cold, the water, my soaked clothes, the suffering eyes, the crying. Some years ago I found myself in the middle of a whale slaughter, and I documented it. The choice to join political and animal rights groups brought me there. I wasn’t prepared for the deep experience that shocked my heart and my senses. I remember it as a suspended memory, but in that moment, as I witnessed helpless innocents being slaughtered, something clicked. It was eye-opening in a way that made me promise to myself that I would try to make a difference, using the tools I had. My voice, always, and my eyes that, coming from a family of photographers, I could use through a lens.

I also remember the terror of trying to raise my own voice but not being heard, the powerlessness of ﬁghting for my freedom but failing, as I later experienced abuse myself. A man tried to control me and prevent me from being independent, not a rare thing for women. I thought I lost everything, but ﬁghting back made me stronger instead. I surely owe part of my determination to that experience.  This journey is hard, as we don’t live in a society that supports freedom, and social pressures make you believe (a girl like) you cannot make a difference, especially if it’s against the powerful. Photographing humans’ and animals’ stories is my way to explore, go in depth, learn, and give back. I am lucky to be able to do this.

I do what I do because I can contribute to the ﬁght for total liberation and therefore I must. I do it because I want to expose the unjustiﬁable abuse and the sick power dynamics we live in. But I believe it’s important not to ﬁght for animals only. I think of those that are more oppressed by the powerful or marginalised and cannot be free to even consider to change. I do what I do and leave a trace of what I witness because we need to change society immediately, and I wish that everybody can experience solidarity and have a choice. Humans and animals.

The real question is, is it acceptable for justice to protect abuse? Is it acceptable that liberation acts are called and punished as theft and misappropriation when it’s legal for people to own those same bodies and lives that only belong to themselves in the ﬁrst place? Everyone of us has a responsibility of questioning what is considered right and wrong, and if we want to change the paradigm and the oppression dynamics, we surely have to free ourselves from the falsity and fear that the authority and the powerful would like to impose on us. Documenting abuse is sometimes possible without breaking the law, but in other cases it’s necessary to challenge a legal system that exists to protect proﬁtable abuse, and reach the goal of getting the unwitnessed out there.

A lot of this work is about suﬀering, dying, death, cruelty, and pain. What do you do to not own that pain yourself? Do you divorce yourself from it? If so, how? How does it aﬀect you? What do you do about it?

I learned a secret while documenting: looking through the viewﬁnder and looking at what happens around me as little as necessary makes me feel less present in the scene. It makes it all seem less real. It’s ironic to have a camera as a safe space, but focusing on the frame and the technical aspects keeps me mentally clear. I also usually build some sort of protective emotional barrier and try not to interact naturally with the environment. During a long term undercover investigation, that barrier kept me going for a while, but one day I freed two animals. Rescuing them made me ﬁnally feel free to interact and care for them, and the protection fell down. I couldn’t bear to see the suffering, so I couldn’t go back to the place anymore.

Constantly reminding myself that all the suffering goes on regardless, and remembering the reason why I’m witnessing it, helps me to cope too. Sometimes it even makes me literally think “well, at least I’m not at home.” At some point, I do get home, and that is when I’m confronted with that pain. Rationally I realise that what I witness is not my fault, and neither is the failure to change things in the short run, but it’s disturbing. The thought I ﬁnd the hardest to accept is how some people are able to inﬂict suffering or be indifferent to it. It’s ironic how the phobia I had of zombies when I was a child is more or less the same overwhelming fear I get today if I think of people as a crowd of unstoppable and unaware consumers or abusers who don’t care about injustice or who blindly perpetrate violence.

Sharing with others helps me, however I also seek solitude and peace of mind to recharge. I often need to switch off and dedicate myself to totally different things to keep it healthy. In the end, it’s the strong feelings I feel during ﬁeld work that come back, and stay. Knowing that many are ﬁghting to make this a better place feels good and the awareness of creating literature makes me process the bad things. Once you see the suffering in someone else’s eyes you cannot unsee it, and to stop being active, in any way this may be, would be only anesthesia.

“The time will come when men such as I will look upon the murder of animals as they now look on the murder of men.” Quote attributed to Leonardo da Vinci, who was born in 1452. How long do you think it will take for society to come around and want change for animals?

As a western white woman, I carry the privilege of living in a place where I don’t have to ﬁght struggles that other societies or individuals who are abused, exploited and marginalized around the globe have to face constantly. I believe this must be taken into consideration when we talk about “society”; there are many different ones and extremely different contexts. Many people face an everyday reality that just makes it impossible for them to even consider wanting change for animals. In fact, I think that ﬁghting for the end of animal abuse alone is completely pointless and politically incomplete until humans are no longer abused. I cannot judge other individuals and societies, as I believe questioning change for animals and having access to the opportunities and choices we have is by deﬁnition a privilege.

Given this, privilege must also come with individual political responsibility, and I don’t understand the egoism of many people who are in such a position but don’t act upon that responsibility. I can only comment on societies that I know and I am part of, remembering though that we don’t live in equal opportunities either. In general things are changing and people are becoming more and more aware of animal abuse and its intersectional implications and consequences. More people are understanding the crucial impact of animal agriculture on the environment, human rights abuse and climate damage. However, I fear capitalism, consumerism and patriarchy might remain the engines of our societies if we don’t act quickly. Political radical movements give me hope, but I am afraid we’re still lacking proper political elaborations and intersectionality around animal abuse and its links to other forms of oppression, such as fascism, racism, inequality, gender abuse, and the other way around too. I’m afraid our societies are way too brainwashed and dependent on the comfort for the few that comes from capitalism, proﬁt, inequality and far right ideologies to be ready for the deep structural change we need immediately. I am hoping to see the ﬁght for total liberation, human and animal, growing in the future, this is the change I want to see the most. I don’t have an answer on how long the process could take. This depends on all of us.

How much creativity can you as a photographer bring to a scene? You’re reporting as a journalist, but how much are you also trying to include your perspective as an eye-witness, as well as your own creative expression into the frame?

As photojournalists, we have agreed to an untold deal and must observe one basic ethical requirement ﬁrst of all: we promise our audience to always portray the truth without manipulation or speculation. I believe this is very different from being neutral. I don’t like neutrality. I cannot imagine photography as sterile documentation that is not the result of our own sensorial experience as physically present witnesses, and I think it’s our duty to also be authors. I personally doubt it is even possible not to inﬂuence the images: in front of a speciﬁc scene, you constantly make choices that reﬂect your feelings or perspectives and affect the result, maybe not even on purpose. This is where creativity comes in, and in photography there are deﬁnitely a few tools available.

I like to begin brainstorming starting from the concept and highlighting some key words. That helps me to then make technical choices that embody that concept. A speciﬁc angle, a composition, the focus, what I choose to include and not to include in the frame, a certain light are all elements that don’t manipulate the scene but can intensify its message, mood and impact. Eventually, depending on the type of project, I like to also put my creativity in the sequence of photographs, aware that different edits can result in different emotions in the observer. And, maybe, this is the key of it all. “E-motions” are by deﬁnition characterized by direction and movement. I think it’s important to use all the technical and emotional tools to get the people to be moved and move, to personally connect, to feel what I feel, especially to feel in a similar way as my subjects. Keeping this in mind is important for me to make responsible creative choices when I shoot.

The outside of an egg laying hen factory farm, during the night, northern Italy, 2018.

Interview by We Animals Media. All images copyright Selene Magnolia.

You can view more of Selene Magnolia’s work on Instagram.

Interview with Amy Jones and Paul Healey of Moving Animals