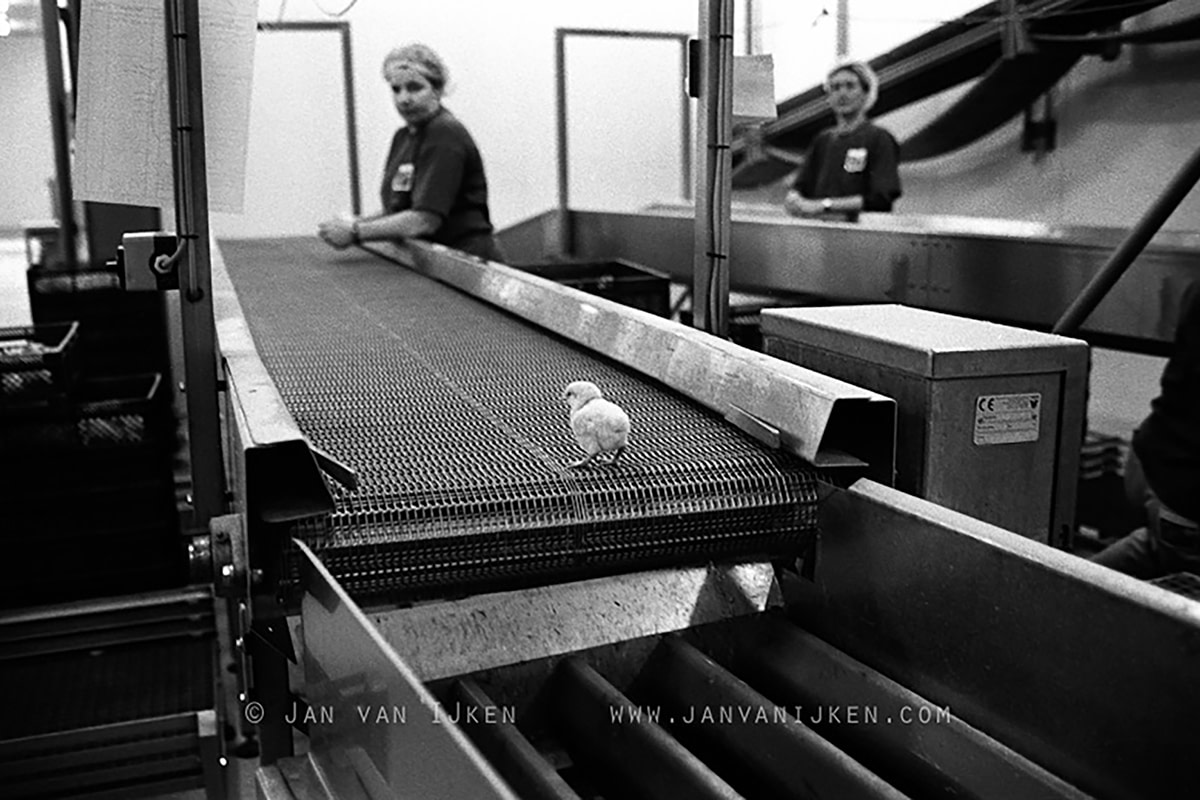 Even if you haven’t heard the name Jan van IJken, you may recognize some of his images of animals, which have gone viral on social media. In 2005, Jan created a photo project called Precious Animals to explore the extreme contradiction in how we treat animals: some we hire therapists and hold funerals for, while others are consumer products whose lives are directed by efficiency. 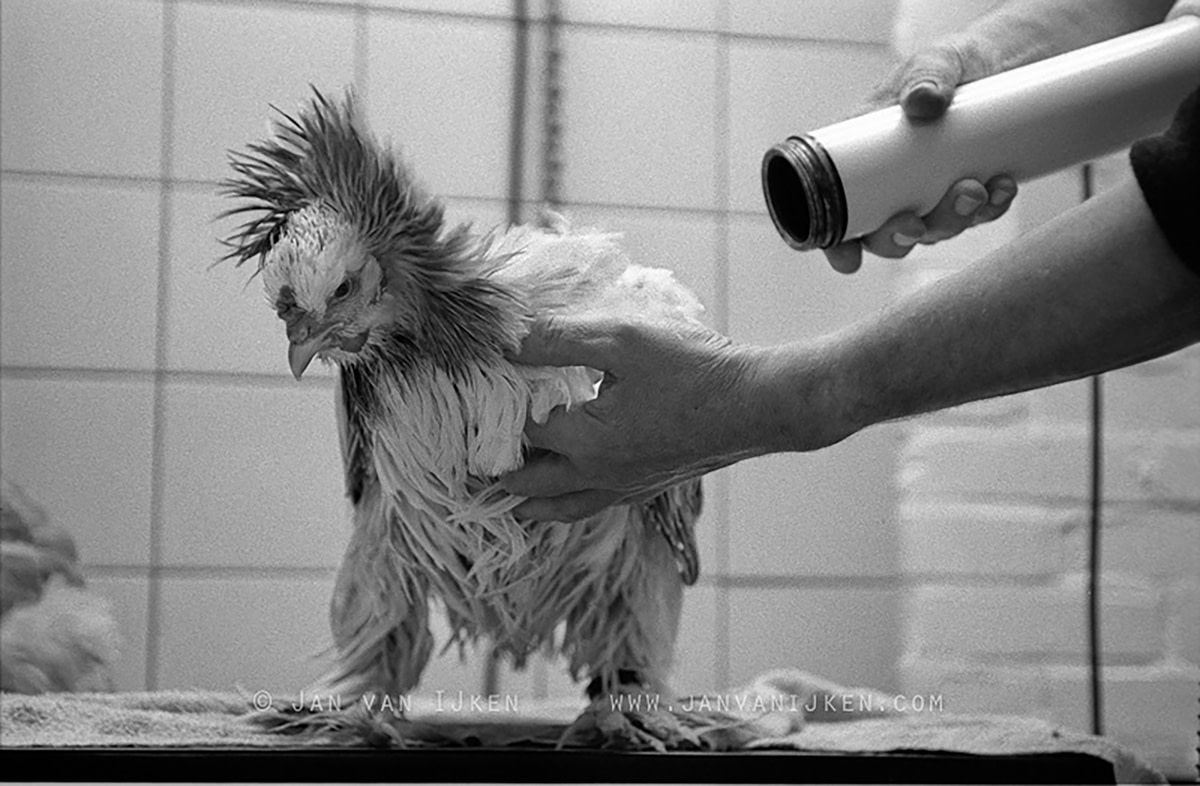 A show chicken is blowdryed

Jan revisited this subject in the short film Facing Animals, in which pigs, chickens, cows, and dogs are the protagonists and we see the world from their perspective. The film exposes the “complex and often bizarre relationship” between us humans and other animals.

Below, Jan talks about the growth of public attention to animal issues over the past decade, giving people space to arrive at their own conclusions, and what he has planned for his next animal project.

Your series Precious Animals cleverly juxtaposes the extremes in our treatment of animals. You state that your aim with this project was “not to pass judgement, but to incite questions”. Why did you feel it was necessary to state this? Do you think you would have included such a statement if the subject matter were humans or the environment?

For me it was important that the project would not be a pamphlet against industrial farming. I wanted to show the very different relationships we have with animals and raise questions about our behaviour as humans towards animals. I told the story by showing the strong contrasts in the treatment of animals.

Beak trimming performed on a chicken without painkillers

A surgical team performs an operation on an anesthetized cat

Piglets’ tails are cut off on an industrial farm without painkillers

In general I prefer to give people the chance to make up their own minds about certain issues instead of pushing them into one direction of thought, so I guess for other projects this might be the same.

The image “Poultry Farm” with a chick in a hatchery about to fall from a conveyor belt has been widely shared on social media. Why do you think this image resonates with people?

I think the photo shows a lot of contradictions in itself and raises questions. Why this sole chick on the belt (contrast the soft little chick against the brutal metal world around it). And: what will be its destiny, what will happen to it?

What has the reaction been to this project, both positive and negative? Has it incited questions, as you hoped it would? Has it reached beyond an animal audience and preached beyond the converted, so to speak?

I have the feeling that this subject is much higher on the agenda and in people’s minds than in 2005, when the series was first published. Hopefully my project made a contribution to the discussion and helped to raise awareness. It was assigned by the Rijksmuseum, published in a special newspaper in the Netherlands, had an exhibition in photomuseum Huis Marseille Amsterdam and was printed in many international magazines.

Inside a turkey farm

Some photos (especially the one with the chick on the conveyer belt and the piglet having its tail cut off) received a lot of attention when published. People reacted strongly. Some people told me they had never seen these things before; others didn’t want to see it.

Precious Animals came out in 2005. Since then, you’ve revisited the subject in the films Facing Animals and the forthcoming Born Naked. What draws you to this subject?

I wanted to become a filmmaker, and I used the theme of Precious Animals for my first short film, Facing Animals. I had a lot of good contacts and I was still interested in the subject of human / animal relations. For my first film I had to learn the craft of filmmaking (which was not easy), and I also wanted to do something different than in the photo project, so I would not repeat myself. During the making of the film, I had the idea to reverse the perspective and look from the eyes of the animals to us. I achieved this by placing small cameras between the animals, e.g. between chicks on conveyer belts. This also explains the title Facing Animals.

Now I want to work again on the human / animal relationship, but totally different: I want to explore the deep and ancient connection between humans and animals in my next project.

As someone who’s spent lots of time reflecting on humans’ relationship with other animals, do you have any thoughts as to why there’s such a stark contrast in how we treat animals? Why do you think we exalt some animals and dispose of others?

I think many people feel a connection with their own animals, because they are close to them. They give warmth, joy, love, etc. At the same time many people look away from animals in industrial farms. Most people are aware of the fact that the majority of these animals lead miserable lives. These animals don’t have names or faces, and they are not seen as individuals. People want to keep them anonymous, hidden far away to avoid internal conflict.

Ducklings at an industrial hatchery

What role do photography and videography have in the animal rights movement?

It’s a bit difficult to say, because I don’t see myself as an animal rights activist. In general pictures have a much stronger impact than words. Because it is very difficult to get permission to film in industrial farms, it is unavoidable that the quality of the photography often suffers from these limitations.

A monkey being used for research and medical testing

Thank you for this interview, Jan, and for your important, thought-provoking work!

Interview by Jo-Anne McArthur and Anna Pippus for We Animals.