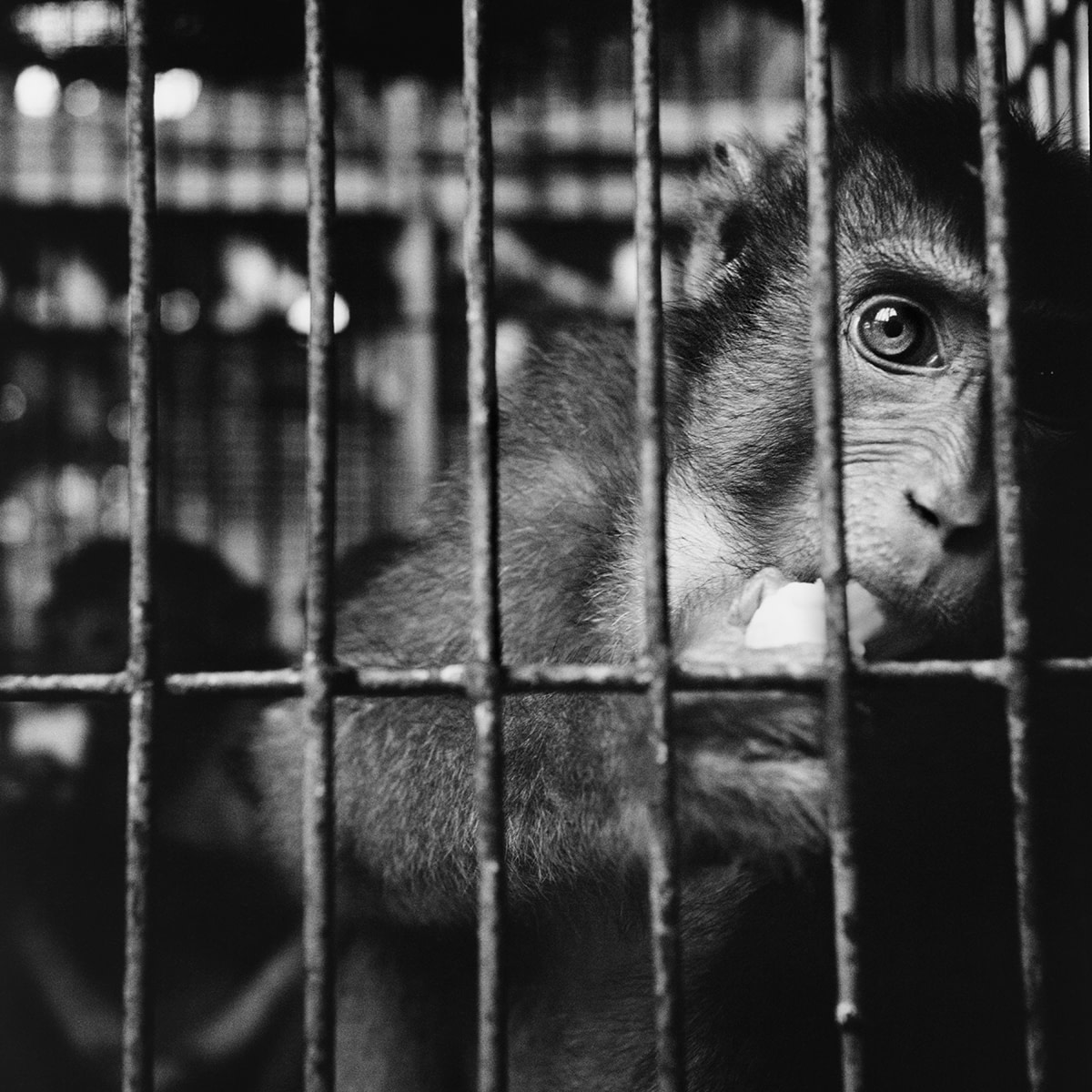 All images copyright Patrick Brown; not to be reproduced without permission and attribution.

Bangkok-based Australian photographer Patrick Brown has dedicated his career to covering social issues that are often forgotten by the mainstream media today.

Patrick has been photographing the illegal trade of endangered animals in Asia for more than a decade, covering its dealers, stockpiles, trafficking routes and markets. The project, Trading to Extinction, has also been published as a book under the same name. For this work, he’s been the recipient of awards from World Press, DAYS Japan, Picture of the Year, 3P Photographer and many others. 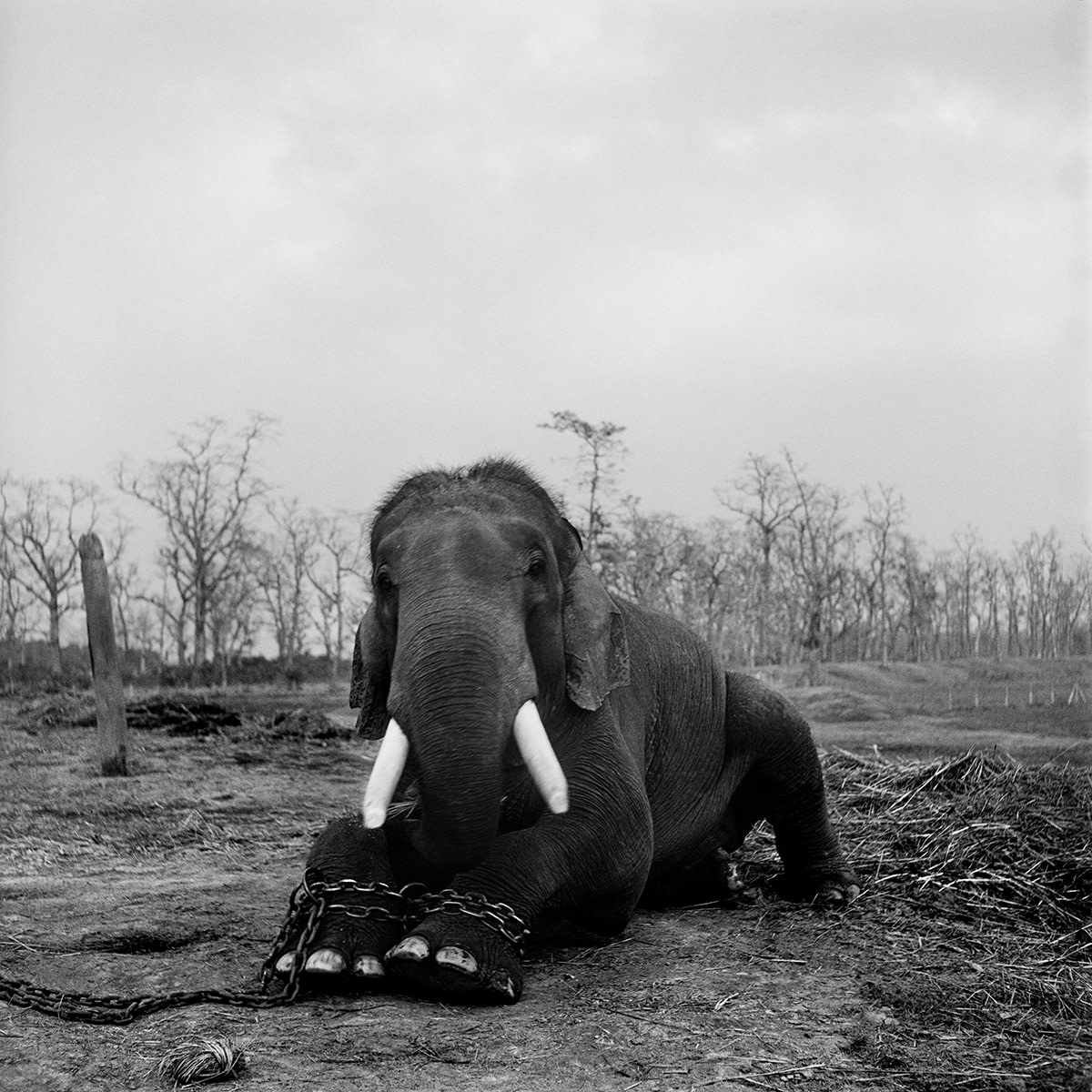 A large bull elephant sits with its legs chained in Chitwan National Park. This 50-year-old animal was restrained because he had killed five mahouts (handlers) during his lifetime. Nepal, 2003.

Patrick compares illegal wildlife trafficking to the drug trade: both are highly organized and profitable, both are fuelled by money and greed, and both involve global trafficking networks. The impact of the wildlife trade has, unsurprisingly, had a devastating impact on animals. Sharks, fishes, primates, birds, reptiles, megafauna, and more are victimized by the millions; many species face endangerment or even extinction.

A Scotland Yard police officer displays a tiger’s head seized during a raid in London. England, 2003.

Recently, I caught up with Patrick on Skype at his studio in Bangkok, Thailand. We talked about creating change through photography, identifying (or not) as an activist, and the politics of getting organizations to take on hard but important subjects that their audience may find upsetting.

Patrick Brown: It’s part of it. I wouldn’t say it creates change, but it does create dialogue that hopefully will lead to change. I think that is one of the most critical things that we need to remember: photographs have never changed anything. The crucial part is the conversation that takes place after the image is seen. If it develops a conversation where people become more aware of an issue, and that conversation goes further up the ladder, then it’s achieved its goal from my perspective.

An Asiatic black bear stands on its hind legs to try to catch food thrown by visitors at the zoo in Medan. Northern Sumatra, 2003.

JM: So few photographers are covering animal issues—mostly we’re doing humanitarian or environmental work. What started you on this path, and why do you find it important enough to spend so much time on this issue?

PB: I didn’t go looking for this project; this project came to me, and it was at the very beginning of the illegal trade becoming an issue in Asia. I had very little knowledge about it. I always thought it was sporadic trade, just like everybody else. I thought these little pockets on the Burma-Thai border, these little markets in Bangkok, they all weren’t connected, they all were separate entities. But obviously when I got further into it, I realized it was an enormous organized syndicate, and what you’re seeing is just the tip of the iceberg.

Animals and bear paws for sale in Mong La, a town on the China-Burma border. Burma/Myanmar, 2002.

Like any illegal trade, it’s what happens behind the closed doors and way up the chain of command that you don’t see that is important. That’s when I really got interested in it—when I realized this was a multi-billion dollar industry, not just some poachers trying to sell some skins here and there.

A handcuffed poacher is photographed with a board bearing details of his name, age, plus the nature and date of his crime. Cambodia, 2002.

JM: The photos you’ve shot are very upsetting—blatant cruelty and gruesomeness. Do you think we have a higher tolerance for those now than when you started 15 years ago? Do you think they’re published more often now?

PB: No. I don’t think it’s increased or decreased. I think it’s just stayed at a plateau.

I remember working with a global NGO—the picture desk wanted to buy my Trading to Extinction images and do a global exhibition. And then it went up to the board of directors, who aren’t picture editors, they’re the people who look after the direction of the NGO. And they said, we don’t want to scare our donors.

This particular NGO, if you go to their website, click on any of their pages, there’s no images of cruelty. You’d think you could walk on any savannah in Africa and you’re going to see lions and rhinos just wandering through. If you click on something to do with tigers, there’s a picture of a tiger walking through long grass.

A tiger walks around an enclosure in a restaurant in Guangzhou. China, 2012.

I think these people are too scared to tell the reality of the situation.  And that is shooting the cause and the issue in the foot and also not having a long-term vision. That’s probably why my work hasn’t been accepted by many NGOs, because I don’t subscribe to the way they phrase the issue.

JM: Do you have advice for photographers who want to take up photographing animals?

A long-tailed macaque kept in a small cage while on sale at a local market in Medan. Northern Sumatra, 2003.

On the other hand, you have some photographers who are activists, who don’t separate the two and you can see they have gotten traction with their work. So perhaps my perspective is dated. So I suppose my advice is to go out there and do it and find your own voice. Don’t listen to people who say you should or shouldn’t. Do what you need to do to make you feel like you’re achieving something and make you feel complete as a person.

JM: Yeah, the activist thing is difficult for most of us. That’s how I started out, I started out screaming about it—“that’s who I am, that’s what defines me, the camera is just a tool for activism.” And that’s gotten me plenty far, but it only gets me so far. Some mainstream publications see an activist and they want to debate ethics, and I’m thinking, this is going to go nowhere! I don’t care what your opinions on this subject are! Certainly, I was shooting myself in the foot in some ways by calling myself an activist. I’m back-pedalling a bit now, although you can only do that so much, and I’m trying to find a balance between back-pedalling and standing my ground and being taken seriously. It’s a fine line.

PB: I believe what’s being done to the most vulnerable species on the planet is an absolute crime against humanity, is a crime against the planet. But I never positioned myself as an animal activist. I kept myself at a distance, and came to it from a journalist perspective. I still have those opinions, and in interviews I do get quite angry with people and governments, but no more than any journalist would do about any human rights issue, or organized crime, or what’s happening in Syria—there’s a lot of passionate journalists out there who are screaming for these issues to be heard.

JM: I agree with you. Thank you for your time—your work is so important and powerful!

All images copyright Patrick Brown; not to be reproduced without permission and attribution.