Joan de la Malla (Barcelona, 1982) is an award-winning freelance photographer, known for his work documenting conservation and animal welfare issues. He is the winner of the Natural History Museum Wildlife Photographer of the Year 2018 in the wildlife photojournalism category for his image ‘The Sad Clown’. We spoke to him about his work and the power of visual activism. 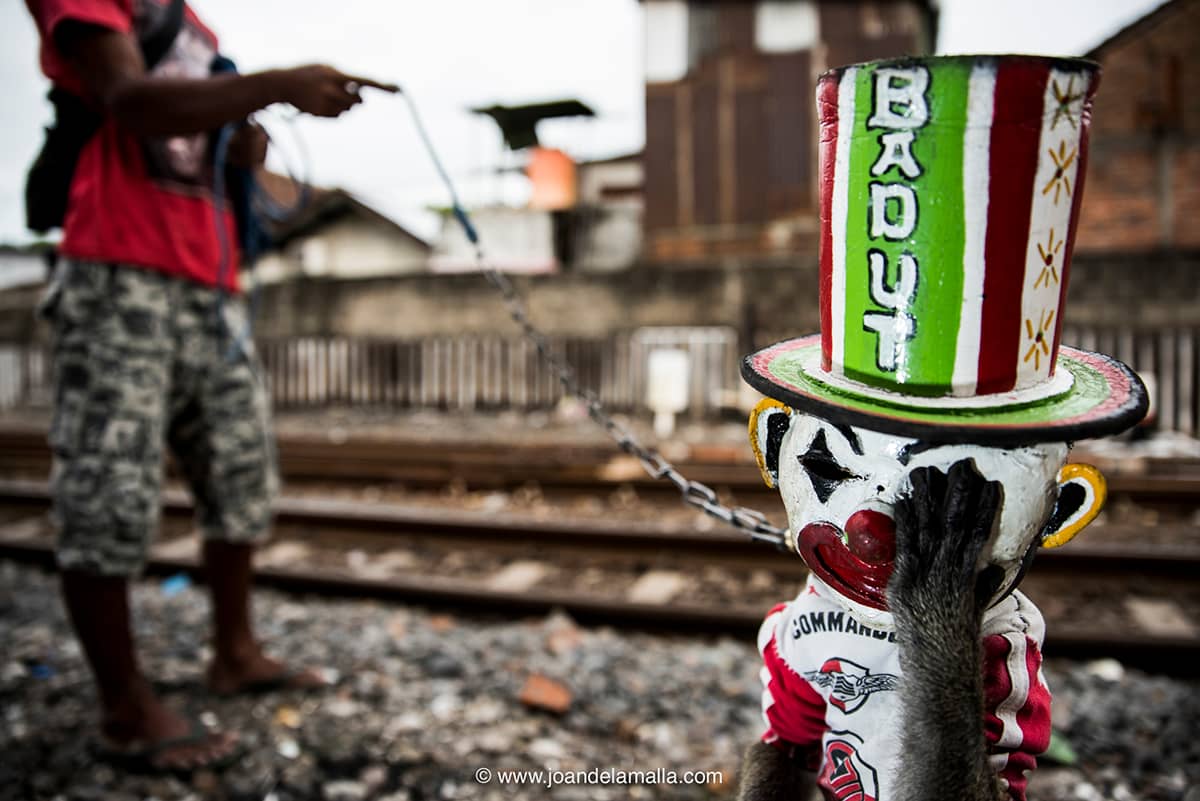 The Indonesian practice of Topeng Monyet uses trained macaques as street performers. These animals lead frightening and lonely lives, deprived of social connections. They suffer harsh and long training sessions to learn the tricks that will entertain pedestrians and earn money for the trainers.

Congratulations on winning the Wildlife Photographer of the Year Wildlife Photojournalism award! Can you describe what your image, ‘The Sad Clown’, is about, and why telling this story was important for you?

The image is about the practice of Topeng Monyet – the use of captive macaques in street shows in some cities of Indonesia. These captive macaques often live in awful conditions deprived of the social relationships that they need as primates, and often they are forced to wear these masks for hours. It is not an ancestral practice, but it is an activity in which some people have found economic refuge, making it a broad-spectrum problem that is difficult to address. This practice is a reflection of the level of poverty that some Indonesians face in their everyday lives.

Telling this story was important because, despite being a widespread practice, not many people paid attention to this issue, nor was there much social awareness about it. In Indonesia there are many problems of deforestation, animals in danger of extinction and, as a consequence, the problems associated with a non-threatened species such as the macaques went a little unnoticed. However, all these problems are usually related and often the same people who capture macaques also capture endangered species. With this work I tried to give voice to this problem with the macaques with the hope that it would have a positive impact on these animals and on many others.

What was the response to the image winning the award? Has it opened up more opportunities to tell the stories of animal abuse? Did it impact the use of macaques in entertainment in Indonesia?

Well, actually, so far, obtaining the award has not given me many new opportunities but has helped give visibility to several of the projects on which I work or have worked. On the contrary, sometimes it makes it more difficult for me to access some topics because after a quick search on the Internet my name is quickly associated with the awarded image, and this makes it more complicated to gain access to some tricky situations.

Just before winning the prize, and partly thanks to the images, a national ban was placed on Topeng Monyet. It was a great victory since the organization that worked to achieve had fought for a ban in Jakarta, but was stuck for 4 or 5 years trying to extend it to the entire country.

After winning the award I had some feedback from Indonesia and, although the ban was already made before the publication of the prize, the popularization of the problem is serving to increase education and social awareness about the inappropriateness of the practice.

Which came first for you: animals or photography? Can you tell us a little about your path to where you are today?

The animals, of course, and the conservation of the natural environment.

I have always been fond of photography since I was young. I studied biology at university and there I started to take nature photography a bit more seriously and I started trying to make a living from it. At the beginning I took a more classical approach to nature photography, portraying landscapes and animals in their natural environment. Slowly, as I saw the immense environmental problems that threaten our planet, I felt the need to contribute with my work to conservation, and since then I try to capture various positive and negative aspects of conservation and animal welfare.

Cantik, a baby orangután, at International Animal Rescue in Ketapang, Borneo. After being caught in a trap her foot had to be amputated.

International Animal Rescue in Borneo rehabilitates orphaned or injured orang-utans for release into the wild.

In Madagascar, ranked 5th amongst countries with the greatest biodiversity in the world, more than 80% of forests have already been cleared. The disappearance of the rainforest threatens the island’s many endemic animal and plant species. 83% of its vascular plants cannot be found anywhere else in the world and it is home to 36% of the world’s primates.

What are you trying to achieve with your work, and why is focusing on animals important? How do you use your images after you’ve shot them?

With my work, I try to give a voice to organizations that work on conservation or animal welfare issues. Often, different assignments have different purposes, such as obtaining funds for the organization, uncovering a problem, or trying to get a change at the political level. With my images I try to adapt to each purpose by carefully choosing the photos that can contribute the most to that goal. At the same time I try to make a personal and honest photographic work with the different actors involved. The issues of conservation and animal welfare are often complicated and delicate and I feel the ethical obligation to have an honest approach with all parties involved.

The David Sheldrick Wildlife Trust houses elephants orphaned by poaching at their elephant orphanage near Nairobi.

How do you see the role of photojournalism in the animal rights movement? Do images have the power to create social and political change?

I think images have an undeniable power. They overcome language barriers and are the media that can provide more information in a shorter lapse of time. We also remember the world in images and, in my opinion, they have an emotional impact superior to video. They also have the advantage of being a very flexible format, which can be used in many different ways. They can be printed and plasticized, they can create a book or they can even be part of an audiovisual or multimedia project. The combination of this plasticity and their emotional impact make them especially valuable and powerful in my opinion.

The capture and sale of wild owls has skyrocketed in Indonesia. Since the release of the Harry Potter movies, owls have become popular pets for children.

As well as being a photographer, you are also a biologist. Does this give you a unique perspective in doing your work?

Being a conservation biologist gives me perspective on some issues. It allows me to see the big picture. Sometimes, as I have already mentioned, conservationist issues are complicated and have many derivatives that often involve certain paradoxes. For example, is it justified to capture and enclose wild animals to reproduce them in captivity in the face of an imminent risk of extinction? My work and the issues I deal with often face questions of this kind and I should position myself. My training in biology gives me valuable information when it comes to understanding the details of some of these topics.

In turn, in some of my works I work side by side with researchers. I often report on scientific expeditions in tropical areas. Knowing the jargon of the researchers makes it easier to understand their work and often makes the scientists feel more confident with me.

Although it is illegal to trap a wild macaque, once in the market selling a macaque is a legal activity. Many mothers and adult macaques are killed as they try to protect young from trappers.

What do you enjoy most about your work? What do you find most challenging?

There are two things that I love about my work: one is discovering, once the work is done, that photographs have been a key element to achieve a substantial change in some aspect of conservation or animal welfare. An example is the prohibition of the practices of street shows with monkeys, to which I contributed with my images.

The other thing is the access to stories and places that could not be easily accessed through other ways. For example, having access to an expedition to the virgin center of Borneo to reintroduce rehabilitated orangutans, or the chance to accompany scientific expeditions to the remote north of Kenya to determine the ecological status of the area.

In the animal markets of Indonesia, animals who are packed together and treated poorly wait to be sold. The markets trade in many kinds of live animals, including birds, mammals, reptiles and amphibians, some of which are protected by law. Often threatened species are sold secretly at very high prices.

What are you working on at the moment? What’s next for you?

I am currently working on an exciting story about the relationship between humans and bats in Madagascar. In a few months I plan to work in Bolivia on a project about the perception that some Amazonian populations have about climate change and how it affects their lives.