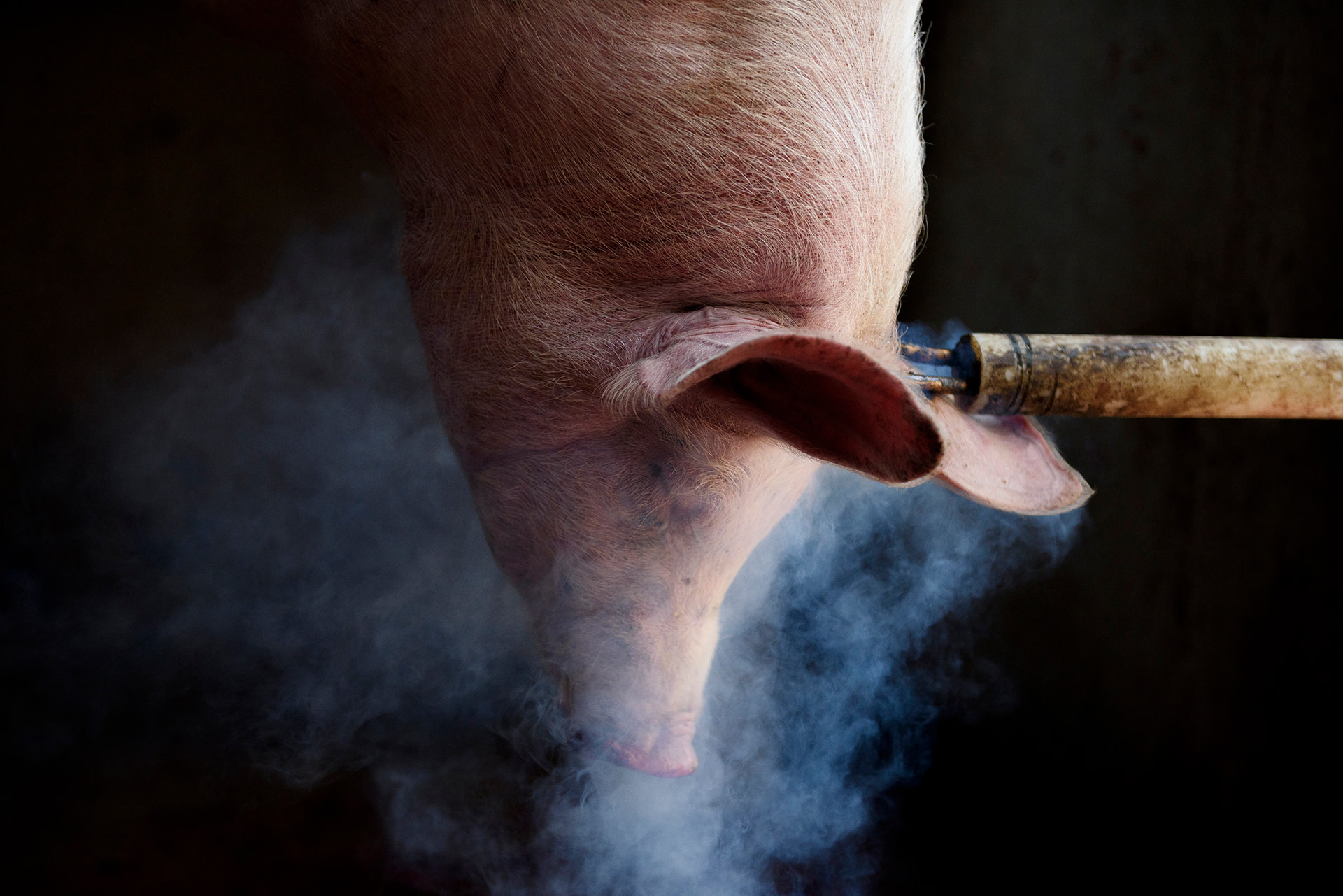 Aitor Garmendia is the award-winning photographer behind Tras Los Muros (Behind the Walls). He describes the project as “A photography project for animal liberation.” We spoke to him about his work and the power of a single image. 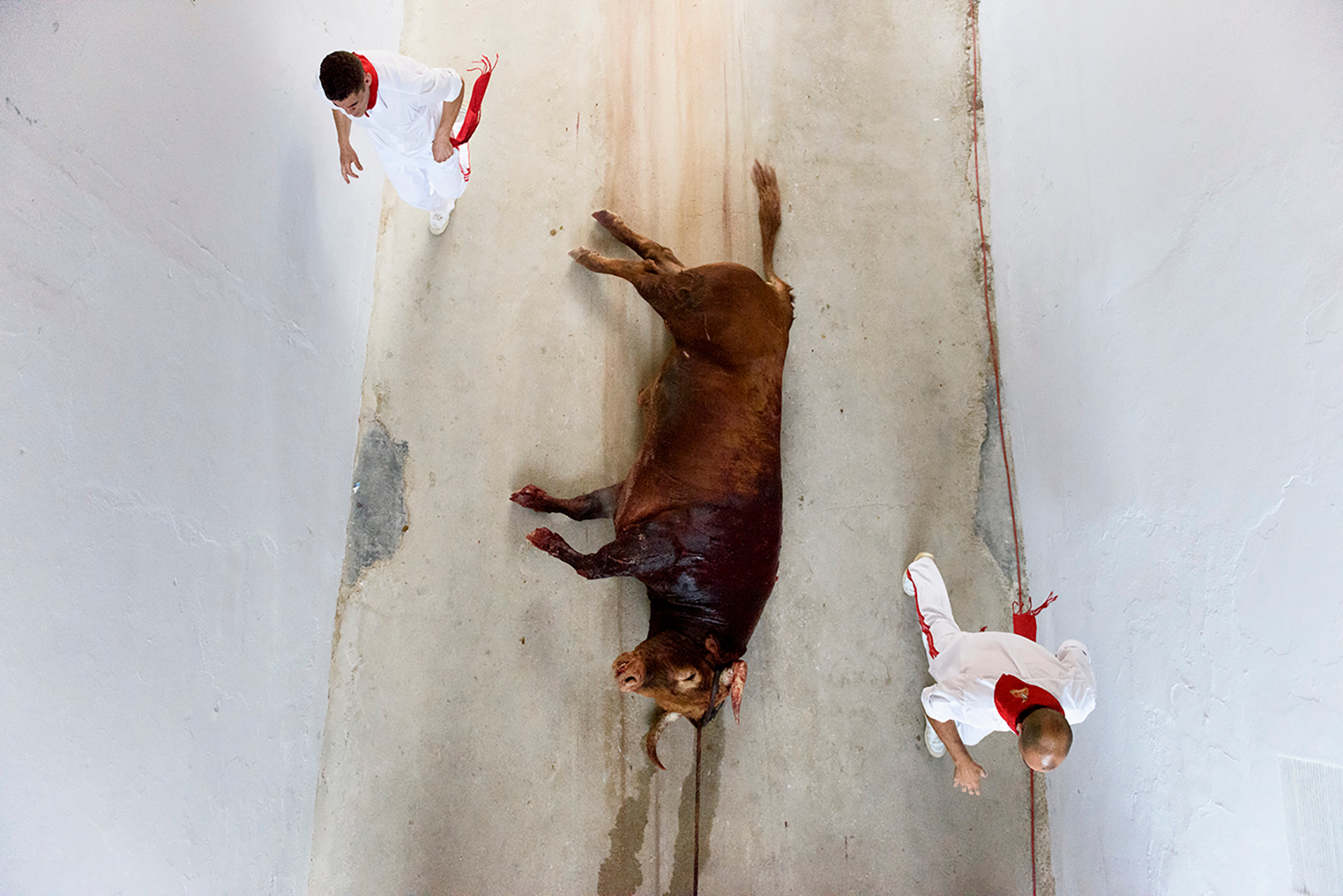 Your project, Tras Los Muros, tries to expose injustice and make it visible to the world. Can you describe how you became a photographer and how you began taking photographs of animals? What is your experience of doing this project?

The project came about after a period of reflection. The organizations I had been working with for years started using strategies that made me uncomfortable, so I left. After reflecting on the movement and my place in it, I looked for a project that could contribute, as much as possible, to the political needs of the animal rights movement and at the same time allow me critical autonomy.

During these four years of work [on the project], I have kept a positive balance. By collaborating with other people and organizations, I have established networks that have allowed the project to grow, and shaped it. It’s given me access to very closed places, as well as improving my analytical and critical eye.

The project uses photo reportage from the animal exploitation industry with reports showing the struggle of those who defend animals, to create tools to combat discrimination and oppression – known as speciesism – to which non-human animals are subject. I seek not only to reflect how animals suffer systemic oppression, but also to provide tools for political agitation by documenting different means of struggle and direct action.

Although I have undertaken the project alone, I did not conceive it alone, and I see it as part of a whole network of anti-speciesist work that I share with colleagues around the world.
I usually work in collaboration with other people, other projects or other organizations. I see the project not as an end, but as a tool for constant change that is just one part of a movement.

My photo reportage has been covered by various media outlets and has been widely shared on social networks. I’ve been able to shine a critical light on issues such as animal abuse or animal welfare and political issues related to the movement.

It’s a big achievement to win the Picture of the Year International award for your image “Slaughterhouse.” What does this mean for animals?

I am new to the world of photojournalism and it is militant anti-speciesism that has brought me here. A fellow photographer, after seeing my work, advised me to enter competitions – it isn’t something that was part of my plan – and I listened to her. It was great advice because it recognizes not only the job [that I do] but also what it deals with – which is the important thing – opening a window to the world of oppression that animals suffer. It’s too soon to know what will come out of it, but I think prizes like this just help to make your work more visible. What really matters and can make a difference is commitment – continuing to work on something you think is important regardless of recognition.

Your work is very confronting. What has been the reaction to the project, both positive and negative?

You can never know for sure how people will react to your work, because many people will never give you their opinion. But from what I’ve heard and been able to observe the reaction has generally been very positive.

Although both aspects are intrinsically linked and the project is a whole, there are two elements on which to evaluate the reactions. The photographic part of the project, that is being shared widely despite its harshness, and fulfilling its purpose. And the more political part of the project – the relationship with other oppressions, the alignment and synergy with other emancipatory struggles, or the criticism of certain aspects of the movement – has generated diverse reactions and has also helped me reconsider my positions and enriched my way of thinking.

There are people who think that animal rights is not a political issue and should not be compared to other political issues. I am opposed to this way of thinking. Veganism, defined as the rejection of animal exploitation, cannot be considered a lifestyle, a fad or a diet, but a political responsibility to which we must be party if we believe that oppression should be eliminated in all its forms. Animal liberation is a political issue of the highest order. As a photojournalist I have a responsibility, not only to document the exploitation, but also to explain it. The oppression of non-human animals can only be explained from a political point of view and, in the same way, can only be fought from there.

How do you think the representation of animals in the mainstream media is changing? What does it mean that the media is focussing on animals in this way?

The media have not yet done a sufficient job of showing animal exploitation for what it is: the consequence of a system of historical oppression. Nor have they done a very successful job of representing the movement that opposes this exploitation and confronts it. One of the fundamental roles of journalism is to watch over power, but the big media represent that same power, so we can’t expect much from them. While I believe that we must take advantage of all possible media spaces, we can’t depend on them, because this can end up negatively influencing our way of dealing with animal exploitation and those who profit from it.

There is still a lot of work to do.

How do you see the role of photojournalism in the animal rights movement? Do images have the power to create social and political change?

The role of photojournalism here is crucial because you can’t fight against what you don’t understand. The fight for animal liberation and the existence of the animal rights movement could not be conceived of without all of the photo reportage undertaken by organisations and activists over the last few decades.

Images have their place, but I wouldn’t give them too much power. Power resides in people and in how they organise and articulate themselves politically. Images inform, tell stories, and ask questions, but the responses and reactions to injustice depend on people. That is why it is important that those who visually document animal exploitation understand that our role is part of a whole. Of a political whole.

What are your plans for the future? Will you continue focusing on animals?

Yes. I have never considered anything else. More than two decades ago I became conscious of the situation of oppression that animals suffer in all kinds of areas. It’s not that I didn’t know that non-human animals were exploited on farms or in hatcheries, but that I wasn’t aware of what this really meant for them. Since then I have never lost the clarity that I have the responsibility to continue doing this.

← Dead Calf On A Beach, Israel, 2018. Documenting the aftermath for animals of Hurricane Florence →
Share This