0 Items
← A Note From The Field: Pig Slaughterhouse (Thailand, 2019) An Expose on Animal Clubbing at Thai Slaughterhouses →
Interview with Undercover Investigator and Photographer Kristo Muurimaa 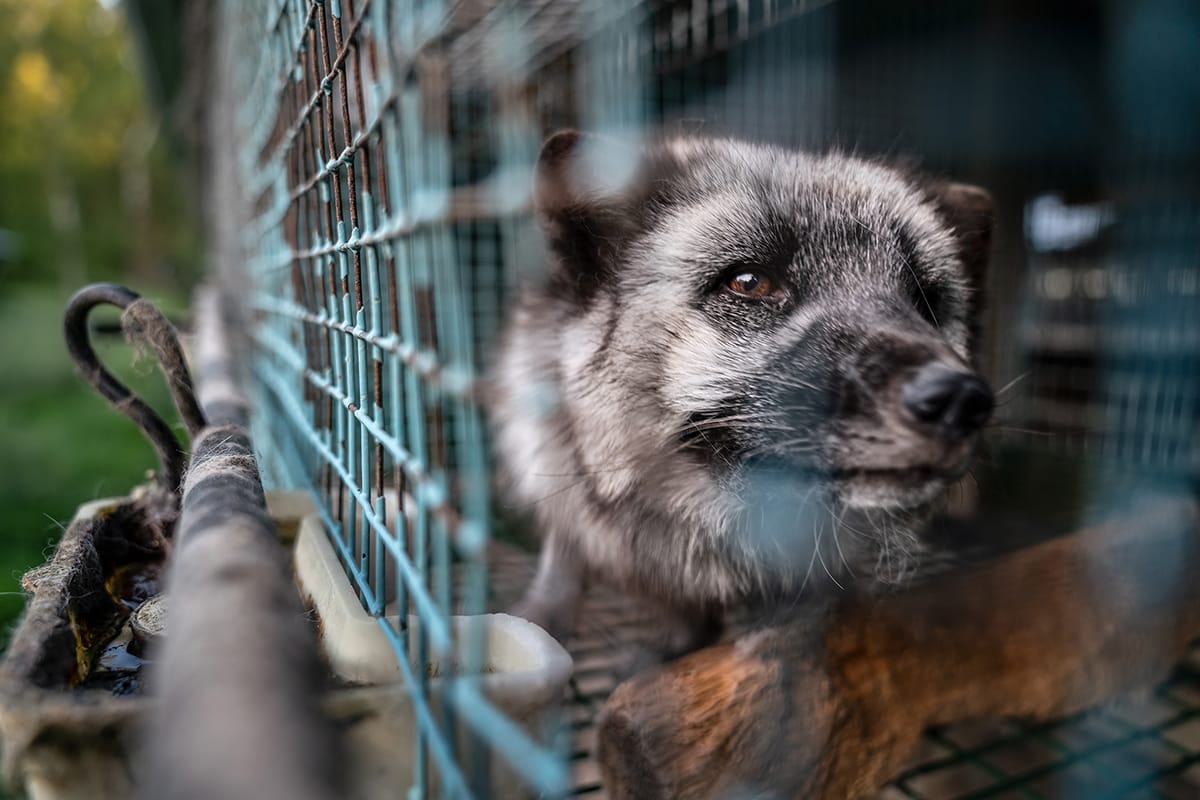 Kristo Muurimaa has worked in the animal rights movement for over 20 years, and been an undercover investigator for 13. His book, ‘Eläintehtaat’, or ‘Animal Factories’ in English, was released last year in Finnish and investigates the relationship between humans and the animals we use through anecdotes from Muurimaa’s journey as an investigator. We spoke to him about his experiences undercover and the power of a changing movement. 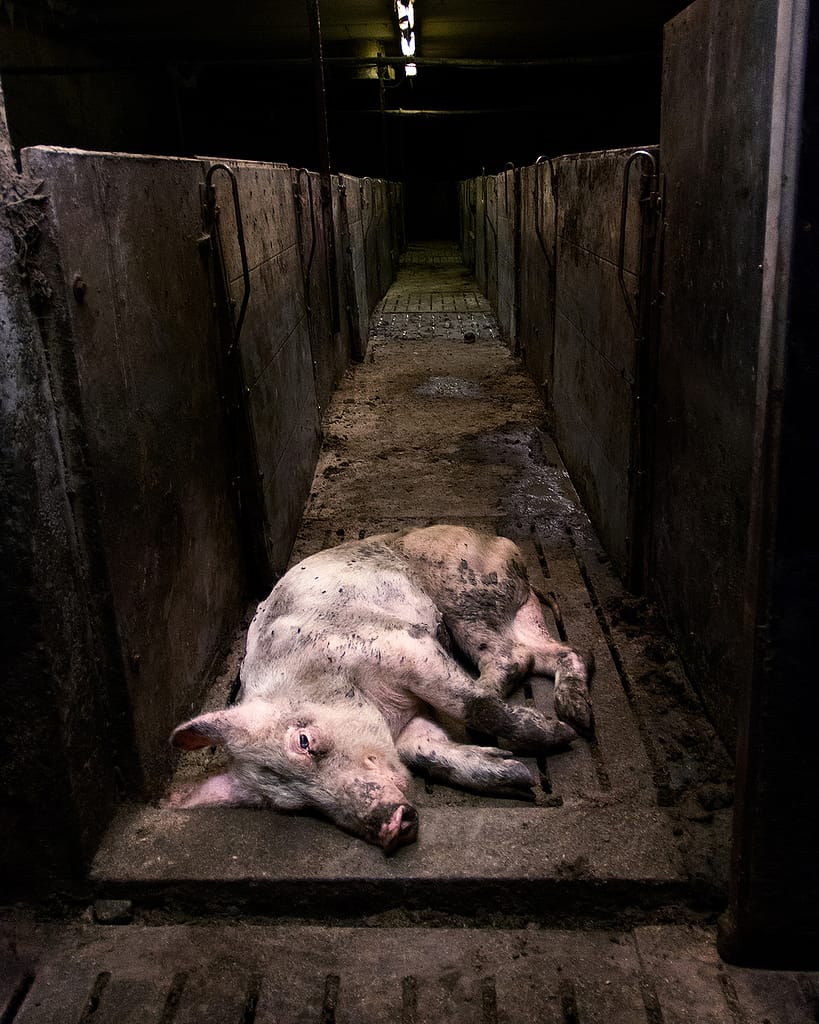 Brutal indifference towards the animals as individuals is the dark side of modern, intensive factory farming.
Which came first for you: animals or photography? What has been your journey to where you are today?
I became involved in the grass roots animal rights movement in the mid 90’s. At that time I basically just wanted to do good and work towards a more just world, also participating in things like antiracist demonstrations and environmental groups. I ended up dedicating my time and efforts in the animal rights movement, because I felt that the movement was the smallest and my input would be the most valuable there.
I was working a lot with things like doing zines, organising campaigns, producing materials, doing street activism. Every time we were using images to show how animals are kept, people were initially shocked, but felt that “things are not like that in our country”. We knew early on that we desperately needed images from local production facilities, even though at that time our ideas of how to use them were very limited. Things like social media didn’t exist, and getting information in news media in a positive way for animals didn’t seem possible.
I started working with investigations in 2006. Our idea was to investigate broiler chicken farming. We had seen the images from local broiler farms, but they always showed very small animals. In the early stages of the breeding period it looks like the animals have a lot of space around them. After five weeks of rapid growth the situation is different, and we wanted to show this reality to the people. After having witnessed a small chicklet slowly die alone on the peat moss floor in one of the huge buildings of an industrial farm, I decided that visiting the farms was something I needed to keep on doing.

I didn’t know anything about photography, but the things I saw on the farms were strong enough so I could tell the stories even with poor equipment and a lack of skills.
The first story made it to the news and created a huge media phenomenon in late 2007. We had visited 100 different farms, and the photos proved that the conditions on the farms were horrible. I’ve been involved in investigations to slaughterhouses, pig farms, chicken farms, egg farms, and dairy farms. During this work I’ve slowly developed an interest in photography in itself, but still I still feel uncomfortable when someone refers to me as a photographer. I’ve had the privilege to work with real professionals, publish a book and have the photos exhibited in a national museum, but I identify more as an activist with an expensive camera than a photographer.

A factory farm has hundreds or thousands of pigs living like this.
What are you trying to achieve with your work, and why is focussing on animals important to you?
When I started filming factory farms, I thought that the most important thing would be to show people how animals are kept. A little later I realised that even more important would be to make them care about it. These two aspects of campaigning have been the key strategies in how I think about investigations, and they have also been the things where we’ve had the biggest success.
I always try to get images into the mainstream media and then create a public discussion around them, challenging authorities and politicians and trying to make everyone speak about animal issues. Even though this forces me to make compromises in how I communicate about animals, I believe that it has been the right thing to do.
The political status of animal issues in society is still very low. To me, the way we treat animals is a building block of a society, and should not be based on marketing lies, injustice and violence in an industrial scale. I believe that raising the status of animals so that animal issues are on the political agenda is maybe the most important task of the animal rights movement.

Cage egg production will soon be history, thanks to coordinated action and corporate campaigns by animal rights groups around the world.
You have been working in the animal rights movement for 23 years and doing investigative work since 2006. What has changed in the animal rights movement during this time?
A lot has changed since investigation campaigns began. More and more people now know how animals are raised on factory farms, and more and more people are choosing to leave meat off their plates. The rise of veganism and huge campaigns around fur farming have made it possible for us to think that we could actually gain victories that were unimaginable before. A big part of the movement has adapted its strategies to this new situation, and works now to advocate for our ideas about the human–animal relationship to a wider audience. Animal rights is becoming less and less a niche issue.
You must have many stories from your investigations. What are some of the lengths you have gone to get your images?
I was going through my memories when I was writing the book, and it seems that most stories seem to involve me falling into a more or less dirty body of water. Other than that, I’ve driven thousands and thousands of kilometers in the night, visited the remotest places, walked countless forests, swamps and fields, plunged through snow and crawled in ditches.

Kristo, waiting for a farmer to leave, so that he and the team can enter the farm. Photo: Juho Kerola

Broiler chicken production is an extreme example of how animals’ lives are reduced to biological existing.
As well as being an investigator, you also teach other investigators to do this work. What has this experience been like?
It has been really rewarding for me. I’ve had the privilege to travel to different countries and work with amazing people from different grass roots groups, when investigation campaigns were booming in Europe. All this was before I really knew much about photography, so it has been more about how to find farms, gain entry to them and how to run a campaign. On the negative side, there are countries in Europe where my main experience now is how their pig farms and motorways look at night. It’s a rather grim image of a place.
How do you see the role of photojournalism in the animal rights movement? Do images have the power to create social and political change?
I think the role is changing, at least in Europe. Campaigning is different; much of what initially caused the huge media attention 10 years ago is not news anymore, so just revealing that animals suffer on farms won’t be enough now. We’ve had to find different ways to tell the stories. I still believe in the images of animal cruelty, and somewhat in repeating the old stories too.

Freedom is so close.

Arctic foxes on fur farms are bred and fattened to grow to almost unnatural size. The images from fur farms show how the animals pay the prize for farmers’ greed. The images were published by news media all around the world. They got lots of attention: the following day, “monster fox” was the most searched keyword on Baidu.com.
Your book, Eläintehtaat, has recently been released in Finland, but it’s not available in English yet. Can you tell us what it is about?
The book has two sides. First, it is a photographic study into the relationship between humans and the animals we use in food and fur production. Secondly, it tells the story of doing investigation campaigns for the last 12 years, in a blunt and honest way, with all the mishaps and problems and difficulties in dealing with this kind of work. It has a lot of dark humor and also a lot of how I think about animals in our society.

Vippa and Konsti live on a sanctuary. On dairy farms, calves are separated from their mothers immediately. These two got to keep each other.

What are you working on at the moment? What’s next for you?
Lately I’ve worked with fur farming. Our last campaign dealt with cannibalism on mink farms. I could tell you what’s next, but that would kind of ruin the element of surprise, so I’ll just say that I’m not retiring yet.

Cannibalism is common on mink farms.